The Falls is the western-most explorable area in Tyria. It is heavily populated by Jungle Trolls, Jungle Skale and Wind Riders, but offers two of the most amazing waterfalls across three continents (points 2 and 3 on the map). Following the three-quarters elliptical path in the southern section you will encounter Dark Oak, and shortly after him, a grand temple with a Statue of Balthazar (point 1). Lucky adventurers might also find a Totem Axe or a Forgotten Fan dropping from Root Behemoths or Wind Riders (respectively) deeper in the zone.

The Falls is also the name of the interactive waterfall (point 2) that hides the entrance to Zinn's Secret Lair.

The only way to access this area is by traveling through Ettin's Back and Reed Bog, with the nearest outpost being Ventari's Refuge. 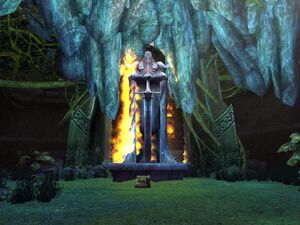 Statue of Balthazar in The Falls 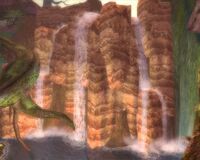 The large waterfall on the west side of the map. 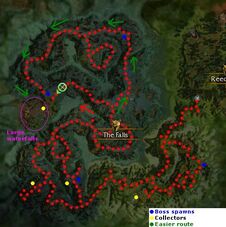