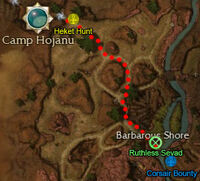 Path to Sevad and his Boys

"Not everyone is happy with us being here. In fact, most fear reprisal from Varesh and the Kournan military. Zudash Dejarin, who apparently knows Koss, is currently in Yohlon Haven and is blackmailing us now. Seems he owes some corsairs quite a bit of gold. He wants us to pay his debt or he'll rat us out to the Kournans. Koss means well, but some of the folks he associates with cause more problems than they're worth. What do you say we get this over with and wipe this Zudash fellow's debt clean?"

Accept: "Let's do it."
Reject: "Let Koss clean this up himself."

"You're a Sunspear, and I can't say I like you. My no-good son ran off to join your little group. But I need your help and I am afraid your secret is the only thing I have to leverage.

I bargained with corsairs to gain safe passage out of Kourna for my daughter, Ailonseh. I fenced some family heirlooms, but while I waited for the money, my contact and my gold were captured by the Kournans. I need you to settle my debt with the corsairs. They will harass me, and I fear that my daughter's very life may be in danger unless the money is paid.

Seek out Ruthless Sevad in the Barbarous Shore and take care of this problem for me. Do that and your secret will be safe."

"I would ask for the money, but I see that Zudash has hired sellswords to do his talking for him. I can appreciate that. Defeat my boys here and I'll call it square with Zudash. As far as his little princess is concerned, however, let's just say that ship has already set sail..."

"You settled the debt with Sevad? Good. I'm sorry I had to hold that over your head, but you must understand I will do anything for my daughter. She's all I have left. I only pray she's safe, now that I see how untrustworthy and brutal those corsairs are."

Simply follow the quest marker to Ruthless Sevad. Talk to him to turn his 'Boys' hostile. Defeating them completes the quest. Before talking to Sevad, consider taking the Corsair Bounty from the shrine just south-east of him for some Sunspear Points when you kill his Corsair Boys.

This quest includes the same NPC as A Fool's Luck, consider doing them together.