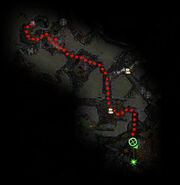 Path to the Iron Forgeman's den

Escort Ennis into Sorrow's Furnace, as part of The Final Assault quest

"We appreciate all ye've done for us so far. Ye know far more about the operations here than any Deldrimor scout, including myself. I have only one last request: destroy the heart of this foul place... the Iron Forgeman.

The Summit's nefarious rage binders harness a tremendous power from within the construct. If ye can destroy all three binders at the same time, the powers will be released and the Iron Forgeman will be destroyed in the process. I suggest ye take Mr. Blackpowder here with ye. He'll provide all the bang ye need."

Accept: "The Iron Forgeman will fall."
Reject: "I must think on this further."
When asked about quest: "Head right to the center of Sorrow's Furnace and destroy the Iron Forgeman."

"Ye've done it. The Iron Forgeman is little more than a pile of rubble, and ye made it out of the Furnace without blowing off any of yer fingers. Well done."

When you get to the first clearing after entering Sorrow's Furnace, you have three routes to choose from. The middle path is the shortest one, but all three will eventually get you to a Furnace entrance. It will be blocked by Furnace Guardians.

After dispatching the guardians, talk to Budger Blackpowder and he will give you a powder keg. Place it at the closed door and it will be blown away. Once again you will find a clearing and three paths (where you defended Orozar Highstone, if you recall), and once again you should choose the middle path if you want the shortest way. Past a winding road, you will come to an area swarming with patrols (and two bosses) and a door guarded by a further three Furnace Guardians. Careful luring should eliminate these groups.

Blow the door and you may enter the Forge. There is a Resurrection Shrine down the leftmost ramp; you should activate it for convenience. After that, follow the quest marker and fight your way to the entrance of the Iron Forgeman's den. While running to that spot, you will pass by the Furnace itself and it will radiate a large amount of heat. Do not panic! It's not going to wipe out your party, but panicking and aggroing the Furnace Guardians below will.

The Iron Forgeman's den has two clear doorways (the quest marker will lead you to one of these, the other is just around the other side). There are a few patrols going about, you will want to lure them outside the den and destroy them. It is highly recommended that your party not take on any groups inside the den except for killing the Rage Binders.

The reason you should not fight in the den is that the Iron Forgeman will protect his turf. He has two devastating attacks:

It is neccessary to get hit by Sorrow's Flame to hatch the Black Moa Chick, if you have all items.

These two attacks and their warning signs will be your biggest concern after eliminating the patrols inside the den. You will literally need to take out the Rage Binders almost simultaneously. They respawn roughly 20 seconds after they are killed. In your haste to take them out, do not forget to keep moving, otherwise your party will be pummeled by the Iron Forgeman. Note that it is difficult to draw out the Furnace Guardians by each Rage Binder (two per); you may have to go in to engage them. In this case, it is best to run in, fight just one, and back out to recover; remember to keep mobile so as not to get slaughtered. Repeat until they are dead, and then you can get on with killing the Rage Binders.

After destroying the Rage Binders, you will see a cutscene showing the demise of the Iron Forgeman. Out of its husk three Flame Djinn will spawn. Read the notes on the Flame Djinn for valuable advice on how to defeat them. In general there are a few things you should know: