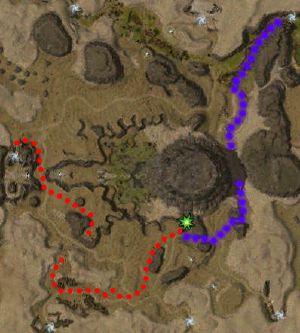 "Long ago, my people came to this desert seeking Ascension. We were met by strange snake-like creatures known as the Forgotten. My people immediately waged war on these creatures, thinking them mindless beasts. While out exploring one day, I came upon a lone Forgotten in Skyward Reach and was amazed to find out that I could converse with the creature. I learned that his name was Sariss Yassith and he told me many of the secrets of this place, secrets that could have helped my people, but alas I was too late. You should seek out Sariss Yassith in Skyward Reach if you would find out more about these Forgotten.

Will you walk the path of wisdom?"

"You come seeking the wisdom of the Forgotten? Know you then that my people are an ancient race, perhaps the most ancient to walk upon this world that you call Tyria. Once we ruled this world, now my people guard the secrets contained in the mesa, the secrets of Ascension. I sense in you an inner strength that I have not seen in the many peoples that have come to this desert throughout the ages. it may be that you will succeed in your quest, but nothing in this world is certain. I shall grant you a small boon to help you in your trials but if you seek greater knowledge, forgotten wisdom, you must seek out another."

Forgotten Wisdom (only to Prophecies characters)

This quest can be done with henchmen. The main enemies are hydras so just be careful and don't aggro too many of them at once. It is possible to get to Sariss Yassith either from Augury Rock or Destiny's Gorge. Both ways are about the same length and equally dangerous. On the map, he is at the southern tip of the largest mountain east of Augury Rock (where ascension takes place).