From GuildWiki
(Redirected from The Frost Gate)
Jump to: navigation, search

At the start there are groups of Minotaurs to defeat including an unnamed Minotaur boss. Be careful around this area and try not to aggro too many at once, since they are strong enough to kill you in large numbers and they charge toward you as you approach the area.

The ballistae are easy to find, since destroying each one opens a gate allowing you to travel further south. Also, whenever a ballista strikes, you will see a flashing spot on your map showing where it was fired from. In order to destroy a ballista, kill the Stone Summit Engineer next to it. The ballistae are located at the points marked A on the map. Continue south until you reach point B on the map, where you will find a Gear Lever. Bring the lever to the gate in order to open it.

Once it is open, you will be faced with a few groups of Stone Summit guarding the three mechanisms. Clear the area and then put the Gear Lever into 3 winches, which together open the frost gate and complete the mission (point C on the map). The first one you activate opens a gate for mobs to come from the south. The second opens an analogous gate for mobs to come from the west. The third starts an invisible 60 second timer, and when that ends, you win the mission. The order in which you use the lever mechanisms doesn’t matter for these mechanics.

When you open a gate with mobs behind it, a group of three mobs (often including a boss) will come through it to attack you, then after a bit of a pause, two more mobs come. There is a longer pause, then two more mobs, and another small group or two after additional short pauses. The longer pause after the second group is enough for you to trigger one lever, kill the first two groups, then go trigger the other two levers and easily be able to survive the remaining 60 seconds. If the battle is going really badly after you’ve used all three lever mechanisms, you can survive by simply running away.

Note that when your lever carrier puts the lever into a mechanism, he/she will lose the lever for a few seconds while the mechanism is started. The lever will then be dropped next to the mechanism. So, make sure they stand and wait for it to drop.

Alternatively, after reaching the area with the three lever mechanisms, you may drop the gear lever and go hunt the very large number of Stone Summit in a canyon-like area off the main path. While difficult, defeating them all will ensure you go about operating the mechanisms with minimal interference. Additionally, after operating one mechanism, a gate opens which allows for several more enemies to enter. With careful pulling you can pick them all off. If both of these are done, you will practically ensure the success of the mission, although time should be taken into consideration.

The bonus mission is triggered by rescuing Rornak Stonesledge from the Frostfire Dryder caves (point 1 on the map). Rornak will ask you to help him retrieve some Secret Siege Weapon Plans from the Stone Summit dwarves nearby. Exit west from the cave, and you will find a group of Stone Summit fighting a group of Ettins. Beyond them will be a crater area where the ballista fire lands. In that crater, you will notice a small opening to your right (the path to point 2 on the map); follow that path. Defeat the two groups of dwarves there and go up the road to the ballista. Rornak will fix it and you can fire the ballista to open a gate on the other side. Afterwards, go back to the crater area, head across the bridge and enter the now opened door. Proceed up the mountain and retrieve the plans (point 3 on the map). Run the plans back to Rornak (point 2 on the map).

The cleanest way to complete the bonus is to avoid Rornak until you've cleared out both the area across the bridge, and the path leading to the derelict ballista. Then talk to him, walk him down, leave him at the ballista, and go get the plans.

There are two separate groups of mobs at point 2 on the map, each of which contains two Dolyak Riders, among other mobs. It is imperative that you pull the two groups apart, as four mobs healing each other will make it very difficult to kill anything. Note that if you attack one mob while in range of the other group, the healers from the other group will step up to heal the damaged mob.

You can use the repaired ballista against the nasties, especially as you approach the now-destroyed door guarded by a big pack of Ice Golems and dwarves. They are sitting ducks, as they pack themselves in. (However: you won't get any XP or drops from death by ballistae).

The Dolyak Riders' healing abilities can pose a problem, especially when there are four together as may be the case at point 2 when attempting the bonus. Defeating them is a lot easier if you can interrupt their spells, in particular Mark of Protection.

The bonus can be quite hard, so you’ll have to pick your group setup mainly with the bonus in mind. There are two groups of stone summit guarding the broken ballista, each of which have two dolyak riders and three warriors. If you focus fire on a dolyak rider, the two can take turns casting Mark of Protection and Shielding Hands on your target, and keep those enchantments on your target the substantial majority of the time. Mark of protection gets cast too fast for humans to reliably interrupt, but heroes can sometimes get it. If you daze a dolyak rider, interrupting it is much easier. The dolyak riders have hex removal, so don’t rely on hexes to kill them.

Whatever you do, it’s going to take a while to kill the dolyak riders, though, and in the meantime, the three warriors tend to all focus on the same target and try to spike it to death. The key is to limit the damage they do, with blocking, weakness, blind, and AoE attacks that scatter the mobs. An earth elementalist with Ward Against Melee, Ward of Weakness, Eruption, and other AoE can do all of this by himself. An elementalist hero can handle this reasonably well if you lock his target on one of the warriors, so that he doesn’t end up wasting his skills on the dolyak riders.

Prince Rurik: Those Stone Summit ballistae are guarding the pass to the Frost Gate! Destroy them so we may lead our people through! We dare not move forward until they are destroyed!

Rornak Stonesledge: Just me luck. I've been caught again. The Stone Summit are tryin' to build a new and devastatin' siege weapon. King Ironhammer sent me in to steal the plans. There is a decrepit ballista pointed to the east. Take me to it, and I'll help ye blast open the doors that keep safe the plans.

Rornak Stonesledge: It should work now. Ye can fire it at the doors. After ye blast open the doors, return the secret plans to me.

Prince Rurik: Well done. The refugees are weary, but they've made it this far. We're now very close to the Frost Gate and the safety of Kryta, but we cannot yet take rest. One of my men, Captain Greywind, tells me he once traveled this path. He says the Frost Gate can be opened, but it will not be easy. There are three mechanisms that lift the massive stone. You must find a gear lever in the small town ahead. Use the lever to engage each of these mechanisms, and the gate will open. Once it's open, it'll be up to you to lead the refugees through to safety. My men and I will hold back the Dwarves as long as we can. I will rejoin you once the last of the refugees is safely through. The Stone Summit will not yield the Frost Gate quietly. May Dwayna smile upon us.

<party leader>: The Frost Gate is open. Go now. We haven't much time.

<party leader>: What was that?

Dagnar Stonepate: These mountains belong to the Stone Summit, human.

Prince Rurik: You cannot save me. Get them to Kryta. Hurry. GO! 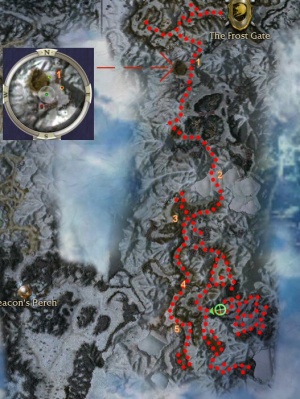