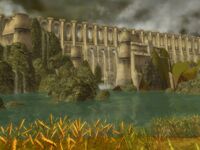 The Great Northern Wall before the Searing

The Great Northern Wall after the Searing

While Ascalons did not cower behind the wall and repeatedly tried to lay claim to the area north of the Wall, the area south of the Wall was supposed to be Charr-free. The land north of the wall (generally called the Northlands), was caught in a constant tug-of-war between Ascalons and the Charr. At times, the Charr would drive the humans out of their cities (as was the fate of Drascir) and at times the humans would push back and establish new cities (such as Surmia).

The Wall rises to great heights and extends the width of the Kingdom of Ascalon. In the adjacent post-searing picture, the entrance at the bottom of the way is several times the height of a human.