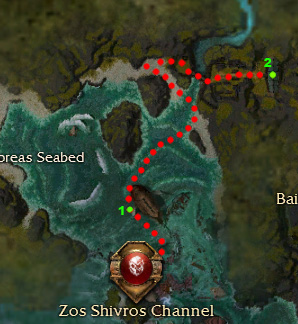 "With the threat of plague subsiding, it seems the Kurzicks have grown bolder. Bold enough to draw the Guild of 1,000 Daggers into our ongoing conflict. The 1,000 Daggers have not meddled in Luxon affairs for almost two hundred years, and it seems that they need a reminder as to why. They are Canthans, and do not value what we value. They prize but two things: gold and blood. Gold is in short supply, but blood is always available. If you are willing, I would have you aid in the removal and replacement of their guild leader, one Lord Senkai. While you are there, slay the Kurzick War Captain as well. Speak to Captain Rion of the Halcyon, who will take Senkai's place. He will fill you in on the rest."

Accept: "You had me at "gold and blood.""
Reject: "Politics nauseate me. Forget it."

"So Senkai is out of the way? Excellent. You have earned the favor of Elora, as well as this."

From Zos Shivros Channel, take the north exit. Talk to Captain Rion, and continue north-north-east until a small bridge is reached. The entrance to the bridge is on the west end, past a hostile Canthan Peasant and Canthan Noble. Each time the party comes into range of hostile Peasants or Nobles, they will turn friendly, beg for mercy before a group of 3-4 Luxon Assassins pop up nearby and attack the party. Go across the bridge and clear a pathway through the village and the assassin ambushes until Lord Senkai is reached.

Killing Lord Senkai will cause any remaining Luxon forces to come out and attack, as well as a considerable Kurzick force led by War Captain Womack. Kill War Captain Womack to complete the quest. It is not necessary to kill everything, after this point one may map travel back to Cavalon for the reward.