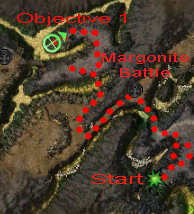 The Cold Touch of the Past

"[Difficulty: Master] Long ago, the Staff of the Mists and the Scepter of Orr were given to the great nations of the world as protection. Predictably, those who wielded their power were corrupted. Terrible horrors were unleashed upon the lands once guarded by their benevolent power. The gods themselves were forced to intervene. They struck down both leaders, sealed the scepters within their tombs, and guarded them with powerful magic. With the Staff of the Mists released into the world again, I fear that the forces of evil will not stop until they possess it. Our only choice is to destroy the scepter. You must travel to the Hallowed Point and destroy the scepter. Only then will it be out of reach of the Margonites."

Accept: "I do not trust anyone else with this deed. I will do it."
Reject: "Destroy an item of such power? How about I keep it instead?"

"I feel a great burden has been lifted from the world. You were successful? Ah... yes. The Margonites still roam, but at least they will be prevented from using the Staff of the Mists to do their evil. Perhaps now, I can rest...."

Kill all the margonite and awakened groups you meet en route. Cross the bridge and kill the Graven Monoliths, then click on the Hallowed point and return to Buuran to finish the quest.