Blood of the Master

"I have a matter that I need some discrete help with. Three days ago in Bergen Hot Springs, two members of the Lionguard were brutally slain. Initial evidence suggests that it was the work of the Shining Blade, but something strange is going on. There were four witnesses but none of them would speak with me when I interviewed them. I believe that at least one of them might be willing talk to someone who is a little less "official", an outsider so to speak. I would be grateful if you would travel to Bergen and obtain written testimonies from the four witnesses.

Will you help me?"

Accept: "I would be glad to help."
Reject: "This isn't my problem."
When asked about quest: "Start the investigation by obtaining a written testimony from Andar D'Leod. He is located in Bergen Hot Springs."

"Why would I speak with someone like you? This is a Krytan matter, and I'll not speak to a foreigner about it. You can deliver that message to your Inspector Caleb if you like."

"Who sent you? I've already told Caleb that I didn't see anything or anyone. All I know is I was standing here minding my own business when I heard a shriek. I looked up, and I saw the two Lionguard lying in a pool of blood. Why don't you ask that Ascalon woman if she saw anything, because I didn't see anyone and definitely not any...I just didn't see anything. That's all I have to say."

"It's good to see a friendly face. I didn't want to speak to that inspector because I wasn't sure about speaking to a Krytan. I came to the springs to get water to take back to the Settlement when I saw the two Lionguard arguing with several of those White Mantle soldiers. Things were getting pretty heated when the Mantle said something about "righteous judgment" coming for the Lionguard just like all the other infidels. I left at that point to take care of some other business, but later, when I heard that the Lionguard were found dead, I just knew it had to be the Mantle."

"I'll tell you what happened already! It was the Shining Blade. Those murderers were trying to extort protection fees from the merchants here when the Lionguard showed up and tried to arrest them. Those Shining Blade murderers just cut them down without thinking twice about it. That's the truth."

"Ah you're back... well... I... I have been... replaced as the investigator on this matter. You should speak with Inquisitor Gilead. He's in charge now."

"I'll take those papers from you. Thank you for your help. The Lionguard is obviously undermanned, so the White Mantle will be taking over the investigation. Your service to the people of Kryta has been noted." 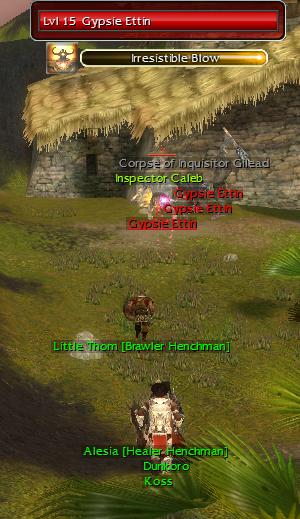 You must head down to Bergen Hot Springs which is directly south if you follow the path.

Watch out for caromi tengu groups and Gypsie Ettin groups between the two towns. The tengu groups can be very large and tend to cooperate a lot. If you hug the east side of the road, you might manage to dodge some monsters. Tengu and Ettins also tend to fight each other, so use this to your advantage. At the entrance to Bergen Hot Springs there are several groups of undead, which can usually be avoided.

In Bergen Hot Springs, speak to the four witnesses marked on your map and their written testimonies. Head back north to Inspector Caleb in Nebo Village. When you talk to him, you will be instructed that he is no longer in charge and that you must speak to Inquisitor Gilead, who should be standing right next to Caleb. Sometimes the Inspector and Inquisitor will be attacked by nearby groups of Gypsie Ettins; if they are dead or otherwise not there when you arrive, simply rezone and try again.