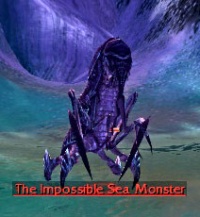 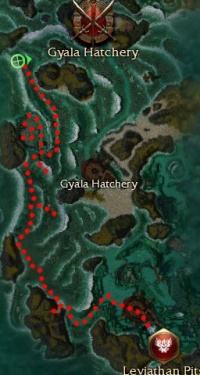 "Zenos and the others should have headed out by now. Meet them in Gyala Hatchery. Don't worry, my friend, "Squad Beta" is ready to come to your aid should you miserably fail!"

Zenos: "Now, I know that <name> promised you all sorts of things to get you out here. But that wasn't my doing."
Zenos: "I am going to kill that sea monster. You don't get revenge on something by capturing it alive. Po Fang will just have to accept it."
Zenos: "Jin Siyan, you're a really sweet lady. I'm glad you're here. But I don't sign autographs, not since I contracted chronic harpoon wrist."
Zenos: "Nendros, I wish I could tell you. I do. But I just don't know. You might be my son, you might not be. Who can say?"
Zenos: "There's no way this is the last expedition, Enelora. I don't care what <name> said. It's obvious <name> can't be trusted with the truth, that much is becoming clear."
Zenos: "Well that was awkward. Sorry you had to be the "bad guy," but the captain has to have the respect and trust of the crew, you know."
Zenos: "I'm going to find the ferocious beast... the mysterious monster... that ate my best friend. I'm going to kill it, I swear. If you're still with me, great, if you're not, you can just stay. As soon as you're ready, let's go!"

Zenos: "I wonder if it was the right monster? Could have been. Eh, let's keep looking."
Zenos: "That might have been it. Had similiar teeth, but... better continue the hunt."
Zenos: "That was definitely it! No, wait, definitely NOT it. I always get those two mixed up."
Zenos: "It really doesn't matter what we killed, so long as something is dead. That way I get revenge on the Jade Sea as a whole, right? Bestenon would have understood. Now go get that reward from Po Fang. And let him know the Zenos Squad is back in business!"

"You killed it? What part of "capture it alive" was unclear? Now I will have to explain that to the other investors. But it is not a total loss... indeed, it sounds as if you enjoyed quite an adventure! Let us hope that it sells well. If it does, who knows? The Zenos Squad may have more adventures in the future."

Go out into Gyala Hatchery (explorable). Only Zenos will follow you to the Jade Sea monster, the others of the group abandon you. It doesn't matter if he dies on the way (He is only level 10 and will almost certainly die).

The "Sea Monster" is just a regular Leviathan Claw. Pay attention to the various patrols running across the Jade Sea that could blind-side your party. Speak to Po Fang in Kaineng Center once the monster is dead.