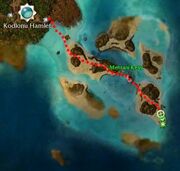 "The death of General Kahyet is very disturbing. I understand there was little choice in the matter, but this will not go over well with the Kournans. Report this to Jerek personally. I don't need to tell you this, but he won't be very understanding of the situation."

Accept: "Jerek's not going to like this."
Reject: "I'm not in the mood for Jerek's wrath."

"You... killed... General Kahyet? I don't care what she said as she died! Demons or a corsair armada! It doesn't matter. A Kournan general was slain on Istani soil by a Sunspear! I won't let this escalate to war on my watch. If it does happen, this will fall on Kormir and her folly. I will take this directly to Elder Suhl. There will be a tribunal to determine the truth of these allegations. You will need to present proof of your claims. If Kahyet was working with corsairs you may want to bring this Ironfist character in to testify. Try talking to that no-good Savage Nunbe in Blacktide Den. He's always ratting out various corsairs to stay off the Istani prison ships."

"Please don't arrest me! I'll tell you what I know! Captain Mindhebeh and Ironfist are meeting in the Mehtani Keys to discuss the future. Look, I'm in enough trouble as it is so I can't testify to anything. But maybe you'll have better luck capturing... er, convincing Ironfist."

"So the noble Sunspears need my help? What an interesting turn of events. I guess my life is worth a few words. Assuming Elder Suhl doesn't send me off to a prison ship when all is said and done. I'll come peacefully and testify during your little tribunal, but only if the Sunspears grant me amnesty. It seems we have a deal then."

"So you found Ironfist did you? That should at least help keep you from embarrassing Elder Suhl. Seems Morgahn himself will appear to answer for Varesh. Judging by the atmosphere in the Consulate, provincial relations have gotten extremely tense; and there's still no sign of Kormir. How very typical of her. Remain close. The Tribunal will begin soon."

Talk to Jerek right outside the Sunspear Great Hall. Then travel to Blacktide Den and talk to Savage Nunbe. Travel to Kodlonu Hamlet and zone to Mehtani Keys. Head towards the southern tip of the Mehtani Keys, where you can find Ironfist. Kill the corsair crew, but Ironfist will turn friendly once "defeated". Talk to him, then return to Jerek for your reward.