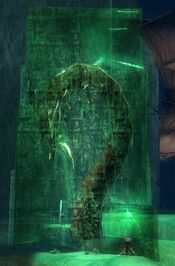 The Leviathan encased in Jade

The Leviathan is a giant serpent-like sea monster found in the area with the Aspect of Shadows inside The Deep. It can fire a powerful projectile attack that does high damage.

In addition to the environmental effect of not being able to cast enchantments in most of the area, the Leviathan will be surrounded by several Reborn Irukandji which will keep placing the Spirit of Disenchantment making Protection Prayers and other protective enchantments nearly useless.

Upon approaching it, the Leviathan will be encased in jade, but will break free as soon as players come close enough.

This is undoubtedly the largest Canthan creature.