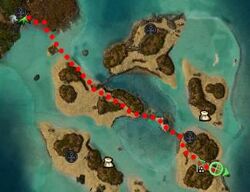 The route taken by the Sneaky Corsair

"Did you see him? Rahlon saw a corsair in the fields of Issnur Isles and chased him right though the village! Rahlon is no match for a corsair, especially if that scoundrel has friends nearby. As a Sunspear, it is your duty to protect us. Please meet Rahlon in the Mehtani Keys and help him chase down that man. I can spare a few locals to help you."

Accept: "We must hurry before the corsair gets away!"
Reject: "Chase down a corsair? Forget it! He's long gone by now."

"Elder Olunideh sent you? Good,I wouldn't want to face that corsair on my own. He looked like a nasty little man. I'm sure you'll be able to handle him though. He's been sneaking around our village and I'm sure it's not for a good reason. I saw him heading off to the south just a minute ago. If we hurry, we should be able to catch him before he gets back to his ship."

Rahlon: "Hurry! He's getting away!"

"Well, he won't be causing any more trouble, but I wonder if there is more of his kind out here. It doesn't make sense that a scoundrel of that sort'd be alone." 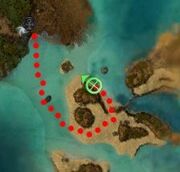 It is possible to out-sneak the sneaky corsair and ambush him. Once entering the map, take your party on a wide arc through the waters to the south, swinging around the small island and the two rock formations on the first large island. Head north-east towards the bridge, clearing out any creatures in your path. Once you reach the bridge, begin heading back north-west towards the sneaky corsair, moving slowly and again clear anything in the way. Once you trigger the sneaky corsair, he will run directly into your group. A crippling attack is useful to slow his progress, but not mandatory, as a full group will likely overwhelm him.

Another way, if cripple skills are not available, is to kill the boss Commander Werishakul at the end of his path show above. The 'Sneaky Corsair' will then have no target to get in contact with. Running through the path killing all the obstructions moves the contact counters (quest markers) well past the double bridge bottleneck so he will actually start very close to the end, as long as the boss is dead you should have no problems completing this quest.