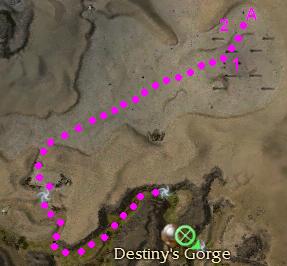 Augury Rock (mission)
Not being primary or secondary Mesmer

After completing this quest it will be possible to change your secondary profession to Mesmer.

"Those who are not Mesmer think our abilities lack substance. In a way they are right, because those who follow the inspiration of Lyssa know that the mind is far more powerful than mere matter.

Perhaps you would care to join us? If so you must learn to steady your mind. As a first test, travel through Skyward Reach to Diviner's Ascent and slay three of the legendary tempest drakes. Maintaining your focus in this battle will show whether or not you have the temperament to be a Mesmer."

"I do not doubt my abilities."

"If you cannot even remember the task I gave you, it seems dubious that you have the mental acumen to be a Mesmer. For the last time, travel through Skyward Reach to Diviner's Ascent and slay three of the legendary tempest drakes."

"You've slain the tempest drakes? Well done. I must admit that I had my doubts about you, but it seems you may indeed have something of what is required to be a Mesmer."

You can do this quest from Destiny's Gorge or Elona Reach. Included here is the map from Destiny's Gorge. The path has no surprises (a few Sand Drakes here and there and occasionally a lvl 22 Sand Wurm) until you near the Tempest Drakes. Just before them (points 1 and 2 on map) a spawn of Jade Scarabs will appear. Lure them into appearing before engaging the Tempest Drakes. From Elona Reach it can be done easier, as the only enemies that should be fought are Drakes.

Tip: There is an easier way to the tempest drakes: follow the wall from the resurrection shrine and fight the group of jade scarabs and 1 sand drake; after that continue on to the drakes. *Note: any sand drake alone near the pylons will spawn 3-5 jade scarabs. Proceed with caution!