Yort the Bronze in Heroes' Audience

Well of the Profane

"Ho there! Yort the Bronze has need of a favor. If you do this favor for Yort the Bronze, he will offer you a boon! Yort has misplaced his Ceremonial Family Sword near an oasis in Prophet's Path. Don't ask how this came to pass, there were many Centaurs and Yort's ghastly demise involved, and he doesn't feel like going into details!

Will you help Yort recover his ceremonial family sword?"

"Yort will have to find someone else." 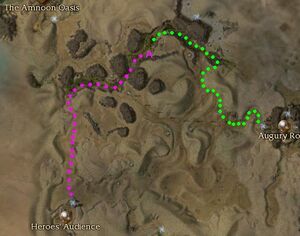 Even though the sword is closest to The Amnoon Oasis, you cannot enter the valley where the sword is from the side of the Oasis.

To start from Heroes' Audience, follow the purple path on the map. In the sand there will be Sand Elementals and Minotaurs, but the Oasis is free of any monsters. You will find some Ancient Remains (hold [Alt]) and in them there will be the Ceremonial Family Sword.

An easier way is to go from Augury Rock (the green path). Northwest from Augury is a teleporter. Go just East of the teleporter and you gain access to the canyon where the remains will be.