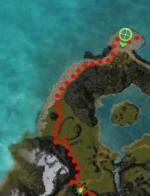 "I am glad to see you, <name>. I was telling a friend of mine about your run-in with the Naga at Zen Nai Falls. He's a scout, so I thought he might be interested. He was, and in fact, he thinks he might have an idea of where they are coming from. If you are not too busy with your studies, you should speak to him about the Naga problem. His name is Scout Shenfai, and he lives in Haiju Lagoon. Perhaps together, you can pinpoint the source of these foul creatures."

"So, you are the one that my friend Zinghu speaks of so highly. You impressed him, you know. Not an easy task, that. I'm sure he told you that I have been trying to locate where the Naga are coming in from, but the truth is, I haven't gotten too far. I tracked them down to the beach north of here, but then I noticed something that has left me stumped. They seem to swarm there, then suddenly disappear, and I never see them south of the lake. Strange, I know, but maybe you can check it out."

"Of course! The Naga have been using the subterranean tunnels! Why did I not think of that? Obviously, the tunnels extend much further than we imagined.... I will send word onto Captain Zinghu and fill him in on what you have found."

This quest is easiest if started in Zen Daijun, since the henchmen are three levels higher, but the Nagas you will face are not particularly challenging (though you still meet some afflicted, which can be challenging).

Once you meet with the Scout, head North hugging the western mountains. You will soon reach the beach and encounter groups of Nagas. Continue east along the shoreline, eliminating Nagas as you go. The beach has an obvious northern submerged area where the first quest marker lies. This is a good time to cast preparations, buff spells, and spirits, as the Naga will appear from the water as soon as you aggro the marker. Once this group is eliminated the marker shifts, and you will fight two more groups this way before completing the quest. Return to the Scout for your reward.

Because this quest is less challenging than others in this area, it can be used as a warmup or to regain Death Penalty from other quests.

You don't need to talk to the Scout before heading to the Daochu Village and clearing the Naga that spawn. You'll accomplish the quest, but you will still need to talk to him for your reward.

This quest works well while doing To The Rescue, because you can fend off the afflicted mob, then the heroes that you helped will then follow you around, allowing you to have four more players to help.