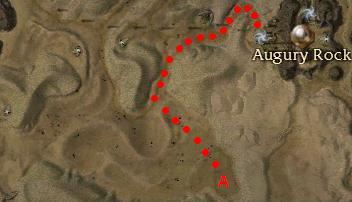 Augury Rock (mission)
Not being primary or secondary Necromancer

After completing this quest it will be possible to change your secondary profession to Necromancer.

"Tell me, have you ever felt the call of Grenth within your heart? The ignorant view necromancy and our cold god as tainted by evil. It is nothing of the sort. Grenth invites you to cast aside all the illusions of this world and judge things truly as they are.

It is not too late for you to take this path. Go into the Prophet's Path and slay the Sacred Griffon of Amnoon, a creature once worhsipped by the people of the desert. This will show me that you are not deceived by the gilded trappings of sanctity that beguile so many."

"Having second thoughts? Concerned that it may be sacreligious to strike down this so-called Secred Griffon of Amnoon? This is how the mortal powers seek to usurp your will and make you shirk what must be done. Grenth is the ultimate judge of what is right and wrong, and through me, he has decided to test your will.
Go now. You will find the beast in the regions known as the Prophet's Path."

"When I heard the death-cry of the Sacred Griffon, I felt a chill. You have done well, <name>. Grenth spoke truly when he told me you held within your heart the potential to be a Necromancer."

Start from Augury Rock and follow the map. The majority of the monsters you will face will be Desert Griffons who do holy damage, so the only tip is not to rely heavily on allied minion masters. Necromancers assisting others in this quest should avoid wearing Tormentor's Armor. This quest can be easily done with henchmen--the only difficulty you may face are the griffons surrounding the Sacred Griffon, but if you move slowly, you are able to aggro only the Sacred Griffon, or possibly one more, which are easily dealt with.