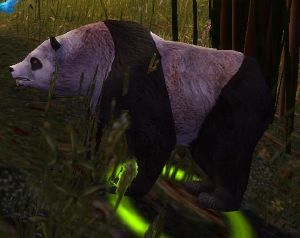 "<Name>, you have become a valued ally, and I would like your assistance on a special project. A red frog has reportedly been sighted here on the island. I'm certain I don't need to tell you that the red frog sightings are very rare in this part of Cantha, and if confirmed, could be an excellent piece of luck for us. But I don't trust rumors and gossip; I want you to accompany Sujun and Zho on a mission to verify the beast's existence. They await you in Panjiang Peninsula."

Zho:
"It is about time you arrived. Sujin, here, believes his pet panda is something of a tracker. Anyone with an ounce of sense knows that this is a ridiculous claim, but Sujun is my equal and insists on letting Ling Wong prove herself. So, while I am loathe to speak these words...we follow the panda."
Sujun:
"Nonsense, Zho! Pandas are among the finest trackers in the animal kingdom! Come, Ling Wong...find us that red frog!"

Sujun:
"Look, a pride of kappa! Be careful not to startle them. Kappa are very fond of cucumbers, you know...."
Zho:
"They look to me like they would be just as happy to snack on Rangers.... Look out!"

Zho:
"Are you certain your panda knows what she's doing?"
Sujun:
"Ling Wong is an expert tracker. Look, a Yeti!"
Zho:
"She is supposed to be tracking the red frog, not Yetis!"
Sujun:
"Well, the two must be very similar in terms of smell."

Sujun:
"Do not judge these poor wretches too harshly; society is to blame for their desperate acts of banditry."
Zho:
"Ahem...."

Sujun:
"Look at that! Is it not magnificent? Contrary to popular belief, lake drakes are actually very shy creatures and only attack when provoked."
Sujun:
"You must have frightened it, Zho!"
Zho:
"It is coming right for us!"

Sujun:
"You see, Zho! Ling Wong has found the red frog! I knew she would. It is a beauty, is it not?"
Zho:
"I am inclined to believe the beast gave itself up out of pity. Return to Headmaster Greico and tell him we have confirmed the beast's existence. I will stay here and make sure Ling Wong does not find any more trouble."

"You have confirmed the sighting? A fortunate sign, indeed. Excellent work, young Ranger. Do not forget to visit Master Togo in Linnok Courtyard now that you have completed your advanced lessons."

Follow the panda, Ling Wong, killing any monsters encountered along the way. Find the frog. If you are having a hard time with henchmen go to the Garden outpost and from there head south. Basically you have a more powerful group to help but it is better to clear the bridge to the south. That place can get swarmed very quickly with enemy troops so it is better to clear the area before actually doing the quest.

Some of Sujun's dialogue appears to be inspired by Steve Irwin, the Crocodile Hunter.

Ling Wong is the name of the Pregnant Panda in the movie Anchorman: The Legend of Ron Burgundy.