The Rise of the White Mantle

Play as Saul D'Alessio and force the Charr legions from Kryta.

Relive history as Saul D'Alessio forces the Charr legions from Kryta with the aid of his Unseen gods.

Durmand: "In the name of their faith, they could do no less." 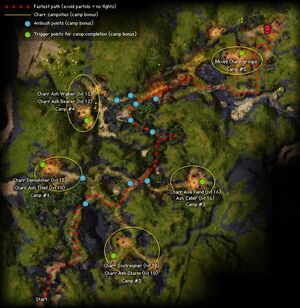 During this mission, you will be under the effects of the Saul D'Alessio disguise, which sets your stats to 550 Health, 50 Energy, 4 Energy regeneration, 16 Smiting Prayers, 10 Inspiration Magic, and 8 Domination Magic, and gives you the following skill bar:

Initially slot 5 is empty; you are given Spectral Agony after defeating Rox Ashreign's group.

You start in the small Krytan village of Demetra, allied with Hablion, Dorian, Thommis, and some less known White Mantle members. The first three will later become prominent figures in the Prophecies Campaign. Defeat the two large waves of Charr coming at you. Remember to use Saul's healing skills, Banner of the Unseen and "Form Up and Advance!", to help your party. For best effect, use the shout to call your allies to your location, followed by the banner to heal them further. Signet of the Unseen is a good damage dealing skill, especially if you aim it at tightly packed groups and use your Mantra of Inscriptions to recharge it faster.

After you have defeated these Charr, head in a Northeasterly direction, trying to avoid fights as much as possible. This is not difficult, since pretty much all of them are mobile patrols, and there are plenty of pathways that allow you to wait for the Charr to walk by. You can easily reach the final bosses without fighting a single enemy. Once at the boss camp (marked by a red skull on your mini map), kill the leader, Rox Ashreign, and his two lieutenants, War Ashenskull and Anrak Tindershot. A cutscene will follow.

After the cutscene, you will be aided by three Mursaat bosses, Lazarus the Dire, Mercia the Smug, and Optimus Caliph, whose names may seem familiar from the Prophecies Campaign. You will also receive a monster skill, Spectral Agony, which you should use as often as energy permits (healing comes first), especially on some of the tougher, hard-hitting foes. A very good strategy, contrary to popular belief, is to let the Mursaat take the left side while you handle the right. They are still Mursaat Bosses, and are perfectly capable of handling all of the waves except for the last part of the last wave, where even then they may wipe out most of the enemies. Don't worry about healing them, they resurrect themselves within a few moments, and are ready to fight again. This strategy leaves less enemies for you to fight, and less Fire Elementalist enemies Charr Sootreigners to deal with, making the mission quite a bit easier.

Use the same healing strategy as described above, it will be needed, as you will face four enormous Charr warbands, each led by a boss. Luckily, most of them are under level 20 and should go down easily. Be sure to keep to the right side, where enemies are not as numerous, let the Mursaat take over. It is greatly advised that you use Spectral Agony on the Charr Sootreigners as soon as possible, and to use Signet of the Unseen to interrupt their Fire Storms, as they are the most dangerous and can quickly downsize your party if left unchecked. Always make sure your Mantra is active to recharge your signets faster and use Banner of the Unseen as often as it is available during fights. Do not hesitate to kite your entire (or remaining) party using "Form Up and Advance!" if you feel like you're in trouble. Just flee behind the Mursaat, and once again, let them take over.

Be on a lookout for groups with a Charr Hunter Beast (there will be two of them, both coming from the left in separate groups). These enemies will more than likely kill one or two of your Mursaat buddies, but don't worry, the Mursaat can handle themselves. The Hunter Beasts are ALWAYS on the Mursaat's side, so you -normally- won't have to deal with them, which makes the mission easier. If you do end up fighting them, this is a prime target for your Spectral Agony skill. The Beasts usually appear with mostly level 15 melee attackers, who tend to bunch up and should be easy prey to your Signet of the Unseen.

If any of your allies happen to die, they will resurrect automatically after there are no enemies near them. However, if you die, you will fail the mission. Keep this in mind when under heavy fire. If some allies are dead, see if you can clear the enemies near their corpses (kill them or pull), so they can resurrect.

Survive the four warbands to complete the mission and watch another cinematic.

1. You determined how Saul could have protected the Krytan villagers against the initial attack.

All Krytan villagers must survive the two waves of Charr at the beginning of the mission. Neither the deaths of White Mantle nor your team constitute a failure, only the Krytan villagers and children. There are 8 villagers and 3 children.
Making use of the Barbed Bombs, Stun Bombs, Balm Bombs, Explosives, and Rations in the northern part of the village and dropping them will make achieving this discovery easier.

The items have the following effects:

Ignore all of them except the Explosives and the Rations. Grab the first explosive you come to on your way out - on your left as you move into the village center. Hold the Alt key to see it. Run to the incoming Charr and drop the explosives, then use your Signet of the Unseen. Repeat this at least once more, twice if you can. From then on you should run rations to the villagers - ignore the knights. Use Signet of The Unseen whenever it comes up but your priority is keeping the villagers alive.

At least one villager always runs out front alone or with the White Mantle Knights. They will stand in the middle of firestorms so you will need to use the Rations to keep them alive. Also, using "Form Up and Advance" is not suggested for this fight, as it will cause all of your allies to run to you, possibly leaving the villagers exposed to attack.

You will probably need to repeat the mission several times to complete this discovery. You really just have to get lucky.

Many players have found this to be a difficult discovery, and alternate strategies to complete it have been discussed on the discussion page.

2. Find the 5 most dangerous locations Saul may have passed through on his way to the Charr leaders.

Clear out the Charr groups from the campsites on the way to the leaders. Once the Charr are alerted to your presence, pop-up groups will appear around you when you reach certain areas, sometimes behind you. Take your time clearing the charr, use "Form Up and Advance" to retreat when surrounded to keep from getting trapped and overwhelmed. To activate this discovery be sure to explore inside the Charr encampment until a message appears in green text in your chat box.

3. You have demonstrated how quickly Saul might have slain the enemy commanders and driven the Charr from Kryta.

The mission must be completed in under 25 minutes. Be sure to utilize "Form up and Advance" for quicker movement.