The Scar is an area in the east of the Crystal Desert. It appears to be named after the deep gorge that runs the length of it, like a scar in the dunes. The area includes five pairs of two-way teleporters: 1 set appears inactive, 1 set allows transport to a small plateau, and the remaining sets enable shortcuts within the area. 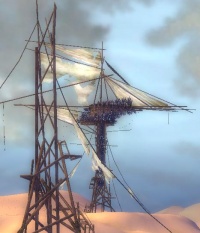 Remains of giant ships in The Scar.

Note: None of these bosses have elite skills