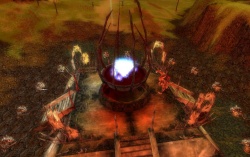 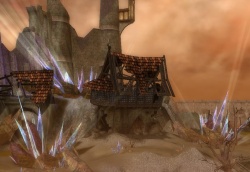 The cities of Ascalon were crushed by the giant burning crystals

The crystals turned the fair countryside of Ascalon into a scorched, barren land

The Searing is the name given to the event during which giant, burning crystals brought about by powerful Charr magic landed on the once beautiful land of Ascalon and turned it to red dust and rock. Once the embers settled the Charr were able to overcome the Great Northern Wall and march through Ascalon, Kryta and Orr. The ramifications of The Searing and the following invasion forever changed these three kingdoms:

Note: The cinematic for "The Searing" once contained fireballs raining from the sky rather than crystals, though the crystals were still found all over post-searing ascalon. This sparked confusion and was later changed to showing blue fire summoning the crystals (rather than the previous orange) and showed the actual crystals raining from the sky. Some things are still uncoordinated with this, such as when Erol from the Ruins of Surmia mission says, "...when the sky rained fire and destroyed Ascalon." He fails to mention crystals at all, though this may just be for the sake of the dialogue.

Two of the missions in the Guild Wars Bonus Mission Pack cover this event; one in Ascalon, showing what happens to Gwen, and one in Kryta, showing how the White Mantle is formed due to the resulting Charr invasion.