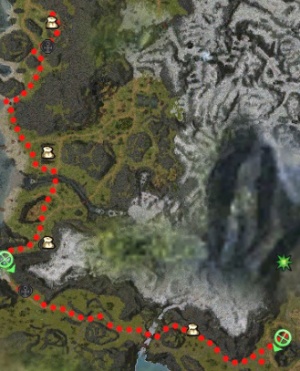 "While you were away dealing with that plague creature, Ang the Ephemeral left a message for you. Apparently, several of your fellow students are visiting Kaitan Village on the Panjiang Peninsula, but Master Togo has sensed a growing threat in that area, and he believes that the students might be in mortal danger. He wants you to travel with all speed to Kaitan Village in the Panjiang Peninsula and help them deal with any threat."

"It is so good to see you, <name>. Master Togo sent word that help was coming, and here you are. You arrived just in time."

Journey to the Master

Travel to Panjiang Peninsula and meet Sister Tai, Ako, Hakaru and Siyan in Kaitan Village. An easier way to get there is to map travel to Tsumei Village and just walk outside. As soon as you reach the quest marker, a group of four Sickened Guards (two Warriors and two Rangers) and two Sickened Scribes will attack. Kill them and speak to Sister Tai to complete the quest.