This article is about one of the Realms of the Gods named the Underworld. 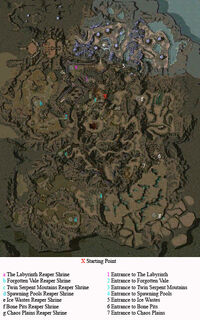 Map of Entrances and Shrines

The Underworld is one of the Realms of the Gods, the realm of Grenth, god of death. It is a very advanced area and mobs are very strong there.

After being granted access to the Underworld by the Voice of Grenth, you will find yourself next to several ghosts (Gwen's mother Sarah, among others), one of whom will offer you the quest Clear the Chamber. It is recommended to first kill all monsters in the surrounding area before accepting this quest. As soon as you accept the quest several doors will open, allowing you to further explore the Underworld (after you have defeated the hordes of Grasping Darknesses that will swarm you as soon as the doors are opened).

The Underworld is one of the few places where you can find Storm Bows, Ghostly Staves, Eternal Bows, Eternal Shields, Eternal Blades and the highly coveted Globs of Ectoplasm.

To access the Underworld, you need to have completed the ascension in at least one of the campaigns; you can pay 1

to the Voice of Grenth in the following locations, when the world has the Favor of the Gods:

It should be noted that if paying 1k to enter Underworld via Voice of Grenth the party will randomly reorder. To prevent this use an entry scroll.

An alternative way to enter The Underworld to to use a Passage Scroll to the Underworld, which can drop from Hard Mode bosses, from any Underworld foe, or from the Underworld reward chest. You can also buy them from a Rare Scroll Trader and they can be used from Embark Beach.

Each area has a different environment and different monsters. Click on an area's name to learn more about it.

The Underworld features several quests which are quite demanding but give tremendous rewards in experience points. These quests can be done repeatedly, once each time you enter the Underworld. All quests you have done on previous visits to the Underworld will be cleared once you leave it, and you will have to do them again if you want to reach subsequent quests.

The following quests start in The Underworld:

Clear the Chamber must be completed to get to the Reaper of the Labyrinth, and Restoring Grenth's Monuments must be taken to free the other reapers. 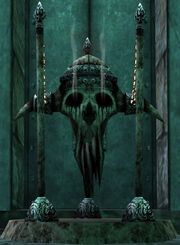 The Underworld Chest
§ The rare material is one of the following:
Ruby, Sapphire, Diamond, Glob of Ectoplasm

The Underworld is one of the hardest places in Guild Wars, so make sure your team is well prepared. Here are some tips and info that will hopefully make your visit a much longer one: