The Way is Blocked 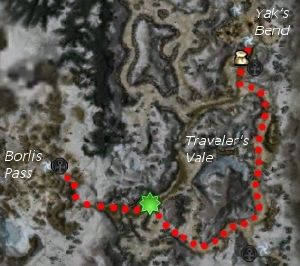 Easiest route to Inar Frostbite, then path to Borlis Pass

"The Shiverpeak mountains are not known to grant pity on travelers. Seems a storm has blown in from the east and settled around Borlis Pass. And as if that wasn't enough, a Stone Summit leader calling himself Inar Frostbite has taken advantage of the situation and ordered his men to block the entrance to the pass. There is no other way to get supplies through. I believe he plans to wait until we're cold and hungry, then start a push toward Yak's Bend. You'd have to be as blind as a Dolyak not to see what will happen up there if we don't do something now.

I need you to lead a party up there and take out Frostbite's force. Can you do it? "

"I'm relieved to hear you cleared the road; I didn't want to have to tell the refugees to boil their leathers for supper. Ever since this storm started up, the Stone Summit have been causing us nothing but trouble. They constantly raid our caravans and pillage our supply trains. These mountain passes are trying enough for the weak and the old without their constant harassment."
"Now on to matters concerning our prince..."

All you need to do to complete this mission is kill the Stone Summit Boss, who is at the very far end of the road to Borlis Pass. If you also have the quests Shiverpeak Stragglers and The Road to Borlis Pass active, there will be a lot of Stone Summit on the road. To avoid them, simply skirt around via the road that goes towards the Ascalon Foothills entrance. This way, you can reach the boss fairly easily, without going through hordes of dwarves to reach him. You can also pick up the refugees for the Shiverpeak Stragglers quest here, and return by the same route, avoiding the dwarves again.

After completing this quest, the Snow Ettins in the area disappear.