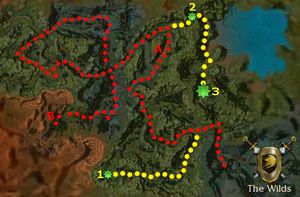 This is a mission entry. For information on the mission outpost The Wilds, see The Wilds (outpost).

Hunt down the Shining Blade kidnappers and rescue the Chosen they have taken hostage.

Follow the path in order to chase the Shining Blade Scouts and rescue the Chosen. Some places along the path are occupied by Entangling Roots, which will create a wall of vines to block the way. Kill the Entangling Roots to remove the vine wall. After the first cut-scene, the immediate area (point A on the map) is populated by several groups of fast-moving Centaur patrols, with overlapping patrol routes. It is important to pull groups carefully, and watch out for approaching patrols - don't be lulled into moving past the intersections without first waiting out the patrols. After the second cutscene, kill the spiders (point B) to save the Chosen and complete the mission.

You will be accompanied by two White Mantle Knights at the beginning of the mission, but as they do not show up in the party window as allies and tend to run ahead they will usually die quickly. Even if they do survive the first part of the mission, they will stop just before the first cutscene anyway.

It's easy to get lost and take long wild-goose chases through the tangle of overlapping paths with bridges. Fortunately there is a map here to guide you through.

Just past the first Entangling Roots you will reach a crossroads. In addition to the path you came from and the path that goes forward (mission path), there are paths to the north and south. Go south and after another Entangling Roots the path will turn northwest, where there will be another path branching off to the west. At the end of that path you will see two Centaur Scouts (point 1 on the map).

This is the most critical part of the bonus - Do not attack them. If you do aggro them accidentally, you can run away, and after giving up the chase, they will return to their initial positions. The centaurs will begin talking about two centaur clan leaders meeting to discuss banding against the humans. Wait until their conversation is over, or you will not be able to complete the bonus. After they have finished talking, a bonus objective will appear, telling you to defeat them, at which point it is safe to attack. They will drop a Vine Seed. Take it with you and head back to the main mission path.

If you drop the vine seed, it will attempt to sprout, but will quickly retract back into the seedcase, allowing you to pick it back up after a few seconds.

After the first cutscene, in the area with the mobs of centaurs, head northeast. You will find a glowing circle at the edge of a cliff where you can plant your vine seed to create a Vine Bridge (point 2). Then you will be faced with quite a number of centaurs and four centaur bosses, including the two centaur bosses mentioned by the conversing scouts, whose deaths will complete the bonus objective (point 3).

Be very careful not to aggro more than one group of centaurs at a time. There are six patrol groups (in addition to two stationary groups) between the cutscene and the vine bridge and it is easy to be blindsided. Don't be in a hurry to advance too quickly and have a second group arrive before you finish with the first group. There is one group in the far north that starts patrolling only after it comes onto a player's radar, but has a route that takes it much further south than another group that starts patrolling sooner. It is easier if you take the right fork at point A rather than the path shown on the current map.

If you are planning on bringing a minion master in your party, be aware that the Moss Scarabs use Verata's Gaze, which will turn your minions against you. Otherwise, this mission is mostly about pulling only one group at a time. There are a number of pop-up groups before the first cut scene. The scarabs reliably pop up in exactly the same spot, while the Life Pod pop-up locations vary quite a bit. Killing each of the first three Entangling Roots also causes additional mobs to pop-up, so it helps to kill all other mobs in the area first.

Centaur patrols can be trouble if pulled wrong, as well, but they follow the same routes every single time. Kill three groups of them before choosing a path at point A, and two more patrols on the right fork of that path before attacking the stationary group. For the stationary group on the left path, wait for another patrol to come and leave before you attack, so that you know you have plenty of time.

White Mantle Knight: Did we lose them?

Shining Blade Scout: Quickly! To the camps! The Shining blade must be warned!!

Centaur Scout: Long has it been since Ramtha Brokenhoof and Horm Frostrider met face to face. The leaders of the two strongest Centaur tribes are on the verge of an agreement.

Centaur Scout: So the rumours about the alliance against the humans are true?

Centaur Scout: Good. It is about time that the Centaurs took a united stand against the humans.

Centaur Scout: It is rumored that there are humans in the Maguuma right now. We would have need of a strong Centaur, such as yourself, to help guard the meeting.

Centaur Scout: I would be honored. What must I do?

Centaur Scout: Take this vine seed. It will give you access to the meeting site.

Centaur Scout: I will guard Ramtha Brokenhoof and Horm Frostrider with my life.

Captured Chosen: Oh no. Please no.

Evennia: You there! You can chase us through the jungle later. But if you have even a shred of decency in your heart, I beseech you, help us save the Chosen.

<party leader>: You have exactly ten seconds to explain yourselves before we run you through.

Evennia: Perhaps it is you who needs to be doing the explaining.

<party leader>: What are you going to do to us?

Evennia: I don't know what to make of you. You're not typical White Mantle, as evidenced by your bravery and willingness to help save the Chosen. Had you not shown up when you did, we might have lost them after all.

<party leader>: Lost them? You weren't trying to get them killed?

Evennia: What did you think? That we liberated the Chosen from the murderous Mantle only to feed them to the spiders? Nothing could be farther from the truth.

<party leader>: Then what were you doing?

Evennia: Rescuing them from the Mantle, that's what. The spiders were a...a miscalculation.

Markis: I don't trust them, Evennia. They're Mantle plain and simple.

Evennia: I can see that Markis. But something tells me if they see for themselves what the White Mantle really do with the Chosen, they'll have a change of heart about their masters.

Markis: What are you saying? That you mean to let them go?

Evennia: Yes, Markis, that's exactly what I mean to do. Who knows. Once they've seen the Bloodstone, they may end up being valuable allies.

Markis: This is a mistake, Evennia.

Evennia: Maybe it is. If my hunch about you is correct, then you'll head to Bloodstone Fen. The truth about the White Mantle will reveal itself. And you will be faced with a difficult decision.