The Fissure of Woe

From GuildWiki
(Redirected from The fissure of woe)
Jump to: navigation, search

The Fissure of Woe (commonly abbreviated as FoW) is one of the Realms of the Gods. It is the domain of Balthazar, God of War. There his Eternal warriors are in constant struggle with the Shadow Army of Menzies, Lord of Destruction. It is a very inhospitable place. Mobs are plenty and very strong. It is not recommended to go there without a full party of eight experienced players. Heroes are allowed, but henchmen are not.

After entering the Fissure you will find yourself next to Rastigan the Eternal. He will be attacked by any Shadow creatures that may find their way there. He stands no chance against them on his own, so make sure to protect him and / or clear out the immediate surrounding area of any Shadow forces before further exploring the Fissure of Woe. If Rastigan is killed, you are transported to your outpost of entry. Also be careful not to accidentally trigger the quest Tower of Courage before the coast is clear (it is safe to accept the quest, just don't attack the quest related foes). You will meet more Eternals like Rastigan in the Fissure, who must not die either.

The Fissure of Woe is the only place in the game in which Obsidian Shards drop, and is a major source of Shadow Shields, Bows, Blades, Staves and Chaos Axes. In addition, it is considered by many to be a worthwhile place to do chest runs.

to the Champion of Balthazar in any of the following locations:

Alternatively, you can use a Passage Scroll, which drop from Hard Mode bosses; from the reward chest (for completing all Fissure quests); and (rarely) from monsters in the Fissure. The scrolls can also be purchased from Scroll Traders and can also be used in Embark Beach.

When entering the Fissure of Woe, the minimap shows unexposed regions in black and reveals them as the party explores. However, unlike most explorable areas, the exposed portions of the map are reset to black for each visit into the Fissure as if the player had never been there. The adjacent map shows the full layout and major areas of the Fissure (the teal-colored dots show the connecting paths between areas).

In general, the Fissure is divided into general areas that form an asymmetrical grid in the form:

Each area has a different environment and different monsters. Click on an area's name to learn more about it.

The Fissure of Woe features several quests, which are quite demanding, but give tremendous rewards in experience points. These quests can be done repeatedly, once each time you enter the Fissure. All quests you have done on previous visits to the Fissure will be cleared once you leave it and you will have to do them again if you want to reach subsequent quests. The Obsidian armor can be crafted in the Fissure, after you have completed several quests.

The following quests start in The Fissure of Woe:

The Fissure of Woe[edit | edit source]

Follow up quests are shown indented from requirement quests.

The Fissure of Woe can be a daunting place for those who tread there for the first time. Here are a few FYIs to keep you alive: 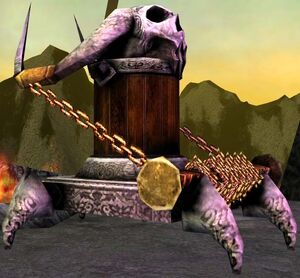 Chest of Woe
§ The rare material is one of the following:
Ruby, Sapphire, Diamond, Onyx Gemstone, Obsidian Shard
Retrieved from "https://guildwiki.gamepedia.com/index.php?title=The_Fissure_of_Woe&oldid=1608986"
Categories: