They Only Come Out at Night 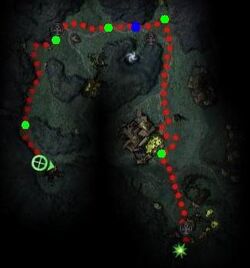 Quest path from Gate of Torment

Keshsek at the Gate of Torment

"A new face then, is it? Many things are changing these days... to see a body of flesh and blood walk these lands is certainly a surprise. Something new stalks these lands. I know not what they are, but I know that they have caused me to fear. They must be destroyed. Will you seek them out?"

Accept: "If there's a new threat, I will deal with it."
Reject: "I think you're imagining things."

Abaddon's Adjutant: "The armies of our Lord gather to cleave those lands asunder. Can we count on the assistance of your master?"
Emissary of Dhuum: "Dhuum has offered his aid to Abaddon's cause. Do not take his word lightly. You will have the forces that you require."
Abaddon's Adjutant: "It seems we have some unexpected visitors. Come. Let us provide a proper welcome!"

"Dhuum, you say? Now there's a name I've not heard in a long time. The stories say he was the God of Death before Grenth broke his throne. If he is involved, this news is dire. Regardless, you have done well."

Leaving from the Gate of Torment, take the nearby blessing and then take out the small group of Graven Monoliths ahead of you. Next take out a patrol group of Torment Demons. The quest marker shows groups you must eliminate. The first group marked is close by and consists of four Torment Demons, including Word of Madness, Blade of Corruption and Spear of Torment. Make sure you dispatch all Torment creatures quickly so they do not use Call to the Torment to replicate.

Next there will be a mob of Margonites to the north-west. Pull this group south to avoid aggro of another group. There will be a group of Torment Demons, another mob of Margonites and another two mobs of Monoliths before you come to the next quest marker. Continue attacking one mob at a time. If you have the quest Good Demon Hunting active, the Great Zehtuka will be close by (blue dot). Follow the map if you have any problems finding the mobs.

At the last mob approach carefully and it is possible pull the Emissary of Dhuum. He is a dervish boss capable of spiking multiple party members for large amounts of damage. If desired you can also pull the other boss Abaddon's Adjutant, a ranger who uses Magebane Shot, who is far less dangerous.