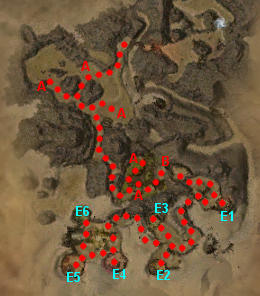 The first part of the mission is to traverse the path from the starting area to the Ghostly Hero at point B. A number of Rockshot Devourers will pop up along the way to fight you. They stack Dust Trap and Flame Trap quite a bit, but aren't much of a difficulty unless you stand in the traps as they trigger, or your team aggroes too many at one time.

There are also five Sand Giants at the points marked A on the map. Each of these will give you a morale boost, so that you can get your party the maximum 10% morale boost before reaching the arenas.

The main part of the primary mission is to defeat the six enemy teams in three arenas. The first arena has one team, the second has two teams, and the third has three teams. Once all of the teams in one arena are dead, you can move on to the next arena. The enemy teams in multiple-team arenas stay apart somewhat, so you can readily fight one team without aggroing the others. It is critical that you do so, both to avoid being overwhelmed, and to not waste time fighting extra opponents. Note that the relatively tight quarters within arenas and large range of some patrols, make potential liabilities of melee AI team members. Warrior henchmen, melee heroes, ranger pets, and minions will often run off and aggro an additional enemy team, so be aware of their placement and flagging. This is not a problem with melee players who are conscious of pulling issues.

You can take on the enemy teams within an arena in any order you like. Because of mob spawn locations and movement patterns, you may find it easier to defeat the team at E2 (right team) before E3. However, if your team stays to the left on entering the second arena, the E3 team will send warriors out to engage you, so you should not have much difficulty engaging the E3 team without aggroing the E2 team. In the third arena, if your team wants to complete the bonus, you'll need to defeat the team at E6 (rightmost team) before E4 or E5. Once all three arenas are clear, the mission is complete.

The Ghostly Hero will accompany you as an ally — he follows whoever speaks to him to activate the cutscene — and must be kept alive to complete the mission. He's durable enough to not be in that much danger of dying under normal circumstances, though he can be more pressured if he is following a melee player than a ranged class player. If you try to retreat and he gets body blocked, that can leave him fighting alone, which usually gets him killed. You can talk to the Ghostly Hero to make him stay at a particular spot, and talk to him again to make him follow you.

Each enemy team has eight or nine mobs, split into three separate linked groups. Two of the groups will wander out somewhat, making them easy to pull separately. These two wandering groups each have three normal mobs. The remaining group has a boss, an Enemy Priest, and sometimes one other mob. The boss/priest group will generally stay back inside their building surrounding the rez shrine, not typically wandering out to fight.

When the Ghostly Hero starts opening the gate to an arena, a timer will start. Pay specific attention to each two minute interval. Every two minutes (i.e., at 2:00, 4:00, 6:00, etc.), if an enemy team's priest is still alive, he resurrects all other mobs on his team — though no mobs of other teams — so the enemy team will be back to full strength at 8 or 9 mobs. Once you start killing mobs of an enemy team, your intermediate objective should be to kill that team's priest before the next two minute mark and the automatic team resurrection.

The tactic to start engaging a team just before the two minute mark can apply to the first team you fight upon entering an arena, if your team will likely have difficulty in killing its priest within the first two minutes. If you need those extra few seconds for the first team in an arena, you can wait until about 1:50 or 1:55 to start your attack. In the third arena, it is not advised to wait to engage the first team, as it is likely that you will fail to save King Khimaar if you wait.

It is often impractical to simply rush in and focus fire on the priest. If you do this, you'll aggro all three groups of the team, and have to fight 8 or 9 mobs at once, which can overwhelm your party. Instead, let the groups that are inclined to come out do so, and pull and kill them separately when they do. There will be less pressure on your team's healer(s) if the bulk of the enemy team is dead before you go for the enemy priest. It is generally recommended that you kill the enemy priest before the team's boss, due to typical boss survivability. With the priest dead, there is no time pressure to finish the rest of the team.

Once either the first two groups of a team are dead or you're getting short on time, push through and focus fire on the enemy priest. It can take some time to wear down the enemy priest, as it heals itself with Word of Healing. Be sure to allot enough time to kill it, and if it looks like you're not going to finish off the enemy priest before a two minute mark, then retreat. Having the bulk of your party caught inside the shrine area when the entire enemy team respawns will probably wipe your group.

Josso Essher is a monk boss of the team at E4. It is quite a capable healer, and can make it difficult to kill that team's enemy priest. It can help for this team to bring some interrupts or other anti-healing or anti-caster skills, in order to make it easier to kill the team's enemy priest.

Note that the awkward terrain often leads henchmen and heroes to try to shoot at the enemy priest through a wall. You may need to flag them inside the building and near the priest in order to get them to do the proper damage. It can also help to spread your party out slightly, to limit the effects of enemy AoE spells and conditions.

The bonus objective is to clear all the enemy teams in the third arena before King Khimaar dies, and before he leaves (which takes precisely ten minutes). The bonus is still achievable as long as King Khimaar is standing in the central area of the third arena. You cannot complete the bonus without also completing the mission. After you defeat all the teams (in any order), you will receive the bonus reward right before the ending cutscene.

The King gets attacked by Custodian Hulgar's team (at E6 on the map toward the right of the entrance) about 10-20 seconds after the timer starts and will be killed in less than a minute if you do not heal him and kill the foes near him. Alternative tactics to save the King are to either rush directly to the King's position before engaging team E6 or rush counter-clockwise from the arena entrance to the E6 team to Khimaar's location in the middle. By all means, avoid aggroing a patrol from the team on the left.

The other two teams very rarely attack the King. While he has some firepower, it's not worth the time or risk to lure enemies to him, and it's never enough for him to defend himself against an entire enemy team.

Rockshot devourers have Barrage, so a group of five of them at a time can deal impressive damage if you don't spread out. The many traps that the devourers lay can even get heroes or henchmen killed when otherwise out of combat, as they can do massive damage in a hurry. Proceed carefully in the initial area, having one human character leading by an aggro distance the rest of the team, so only one character sets off the traps and the minimum number of devourers are engaged at once.

Enemy priests casting Word of Healing on themselves are very potent healers. It helps immensely to daze them, after which they will die fairly quickly. Interrupts with a short recharge are also very useful. However, the enemy rangers Throw Dirt, causing blindness — unless removed, it can cause most daze-causing skills to miss.

If you wish to do the bonus, you must rush into the third arena quickly to save the king: if you get there immediately, mobs will attack you and leave the king alone; if you dawdle, they can focus their fire on the king and kill him quickly.

Josso Essher healing his associated priest can also be a problem. Locking a mesmer hero with several interrupts onto the boss while the rest of the group kills the enemy priest can prevent the boss from causing too much trouble. Another player is unlikely to have the necessary reflexes to interrupt most of the spells the boss has.

One of the groups associated with Custodian Phebus at E5 won't come out of the small room with the boss and priest on its own. Casting a non-projectile spell on one of the foes through the wall will get it to come out. Pull the group well out of the room, or the enemy priest will step up to heal it. The group has two Forgotten Arcanists that can cause major trouble for your group if you try to ignore them to kill the enemy priest.

Briefing from the Ghostly Hero.

Ghostly Hero: Before you can Ascend and enter the Rift, you must first be cleansed. Lead me safely to the Rune Circle at the end of this test, and I will cast the ritual to burn away your earthly imperfections. Your first challenge will be to defeat a single legion of Forgotten. Your opponents will be resurrected every two minutes unless you destroy the priest who tends their shrine. Once you have defeated your foes, lead me to the door, and I will usher you into the next challenge. The challenges will grow harder as you progress. If you defeat all of the foes along your path, we will claim the Rune Circle, and you will be cleansed. Prove yourselves worthy, and you will be one step closer to gaining entrance to the Rift.

Ghostly Hero: Defeat the enemy priests to stop the other team from resurrecting. Once the enemy team is defeated, we will move on. Quickly! Through this door. We face much harder challenges ahead. This last battle will test us all. May Balthazar grant us strength and courage.

King Khimaar: The Forgotten defile the resting place of my people. Have we not suffered enough...? I will never fully rest until the memory of my people is no longer taunted by these filthy creatures...My spirits have been weakened by such blasphemy. I must see the Forgotten removed from this place before I slip away...In a matter of moments, I shall leave this world for good, never to see my people's resting place cleansed...

Ghostly Hero: Under the scrutiny of the gods, your souls will be pure, your bodies cleansed. You are ready for the next phase.