From GuildWiki
(Redirected from Tihark Orchard)
Jump to: navigation, search 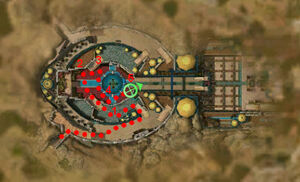 You must be the only person in your party to enter this mission.

Convince the three Princes of Vabbi to join the fight against Varesh.

Defend the garden and its guests by slaying the harpies.

Most of this mission you will spend interacting with the various NPCs. Your goal is to obtain an audience with the three Princes, located at the western end of the lower level, but they will snub you until you do something to impress them.

Unfortunately, no matter what you do, all three princes will refuse to join your cause.

After you have spoken with all three princes, Prince Ahmtur will ask to speak with you again. When you do, a cutscene will play during which a band of harpies descends on the Festival. You will have to defeat these harpies with the help of 4 Vabbian Guards and whatever other NPCs stick around (most will run away). There will be 4 pairs of harpies, two to the north and two to the south, consisting of Skree Raiders, Skree Trackers, and Skree Singers. Note they all use physical attacks, two types can interrupt, and the third can remove a stance. Bring skills to prepare for this as well as a means to self heal. Killing all 8 harpies will trigger the final cutscene.

Tip: Usually, the three pairs of harpies on the lower level can be defeated quite easily because guards engage them at the beginning of the fight, or they can be pulled close enough for guards to notice them. The last pair upstairs is, however, much more difficult since by the time other harpies have been defeated, the remaining pair has killed every NPC in their vicinity. They are reluctant to follow you all the way down to the remaining guards on the floor and fighting an uphill battle on the stairs puts you to a significant disadvantage. If you want to play it safe, you can take the stairs opposite to those leading to the harpies and walk around the edge to the other side of the orchard where you started the mission. The guards that were initially blocking your access to that passage will let you past this time, and you can pull the remaining harpies to the nearest stairs up where two guards still remain. Thus, you get two allies and the advantage of elevation and it shouldn't be too difficult to dispatch the last pair.

Another method is that of running past through the last batch of harpies, until the 4 guards in your group manage to arrive up to top of the stairs and engage the harpies themselves. Then turn round and assist in casting.

Tip: since you must enter this mission solo (without henchmen or heroes), bring some form of self healing in order to survive the fights against level 24 harpies

There are five festivities to take part in:

The changes before the cutscene are pretty inconsequential. After the cut scene, the harpies are stronger, but the Vabbians are a lot stronger, and will mostly kill the harpies on their own, though sometimes the guards wait until you get near to attack.

Kehanni: Morgahn, I didn't expect to see you here. It has been too long, general.

General Morgahn: And I did not expect to find you in the company of Istani spies, dear Kehanni.

Kehanni: Lyssa guides me in all I do, Morgahn. You should remember that which Priest Jeshek has taught us. Trust me when I say this is for the greater good.

General Morgahn: A valid point, Kehanni. Now it is time to celebrate Lyssa and her beauty. I will spare your friends during the festivities, but don't think for a moment that I am not watching.

General Morgahn: Know this, Istani, you are my enemy. I have sworn on my honor to crush you. Should we meet again, I won't turn a blind eye.

Kehanni: Don't worry about Morgahn. He's a man of his word and will spare you this day. We need to attend to the matters at hand. Do not be distracted.

Kehanni: Spread out and talk to the princes. I need to converse with Morgahn about the Kournans.

Vabbi Noble: I hear the Kournans are taking an unusual interest in Vabbian art and history. Perhaps we have misjudged Varesh. A woman of grace and culture would soon realize that Vabbi is worthy of a strong alliance. It could be best for both our provinces.

Vabbi Noble: Art? History? My friend, you're far too trusting in rumors. Varesh doesn't want to study Vabbi. She wants to conquer it!

Vabbi Noble: No. Be serious. Varesh Ossa? She's a noble ruler, as her father before her. The treaties between Vabbi and Kourna are sterling.

Vabbi Noble: There's sterling, my friend...and then there's gold. I'll bet you I know which of the two Varesh has more interest in. Why else would her army be massing at our door?

Vabbi Noble: Famian the Fabulous is staging a new play this month in the Bokka Amphitheatre. I already have tickets, of course. I hope it's as meaningful and moving as his last production. Norgu was in it, and you know how I adore his work.

Vabbi Peasant: What? You mean "Assault of the Twenty Foot Bananas?" I suppose I would call it "moving," if by that you mean the audience disappeared from the theatre faster than a ham from Bokka's buffet line.

Vabbi Peasant: Either that or I don't like bananas.

Vabbi Guard: General Morgahn attended another gathering here a few months ago. I found him to be quite cultured; and such a dep faith the man has in Lyssa. The soldiers under him are lucky to have such a noble leader.

Vabbi Guard: The general, yes. But if you speak of all Kournan leadership...well, I have to disagree. I do not personally like the direction Varesh is taking her province...and Morgahn has done nothing to stop her.

Vabbi Guard: Don't assume that just because Morgahn follows orders that he agrees with them. Anyone in the military will tell you...obey first, then question. General Morgahn is a loyal man who believes in the good of Kourna. He followed Varesh's father, you know.

Vabbi Guard: Well, in this case, the apple has fallen quite far from the tree. The Ossa lineage is not what it once was.

Vabbi Noble: Will there be a new production this month? I would love to escort you to another play. You looked resplendent the last time we attended the theatre.

Vabbi Noble: The last time...? Ah, yes. Now I remember you. Yes, I do believe a new play is opening soon. But, I believe it's by a Kournan playwright. Trying to understand Kournan plays gives me a headache.

Vabbi Noble: Ah, but I heard this is a light romantic comedy; just your style! You do enjoy romantic plays, don't you? Remember the performance during the winter festival? The one that made you cuddle up against me?

Vabbi Noble: That wasn't because of the play. It was snowing.

Vabbi Child: Oh, daddy! Look at that tree! It's floating!

Vabbi Noble: That's the Seborhin tree, Ashante. It's Lyssa's favorite tree in all the world. It's fed with water from the Elon and it grows in the light of Lyssa's smile.

Vabbi Child: Look! A leaf fell right into my hands. Can I keep it, Daddy? Can I?

Vabbi Noble: Of course you can, sweetheart. That means Lyssa is watching over you.

Vabbi Peasant: Kwesigam! It's so good to see you! Where have you been keeping yourself lately? You haven't been at the library at all, and I was hoping to twist your ear about the latest book on making paint from cuttlefish scales.

Vabbi Peasant: Oh, I've been doing landscape work for Prince Mehtu. They're going into his private fault. I'm not sure why he wants so many paintings, but he pays well and I'm happy to work for someone so well-regarded.

Vabbi Peasant: Private vault? How interesting. Tell me, what does he keep in his private vault?

Vabbi Peasant: I don't know. I've never been there and the prince is being quite mysterious about the whole thing. He even has a special name for the vault...Ahdashim. I don't know what it means, but it certainly sounds ominous!

Duel Master Lumbo: Lords and ladies of Vabbi, gather 'round. For today, we celebrate the victory of the mighty Turai Ossa at the battle of Jahai!

Duel Master Lumbo: Long ago, two great armies met near the Grand Cataract of the Elon River to determine our people's fate.

Duel Master Lumbo: One army led by the undead lord Palawa Joko, the scourge of Vabbi, set to bring destruction and chaos to our lands.

Duel Master Lumbo: The second army was led by the great hero of Elona, Turai Ossa, who sought to lead our people to the promised lands of the gods.

Duel Master Lumbo: The two leaders faced off to determine the outcome.

Duel Master Lumbo: Witness the great battle between these great heroes as it was long ago!

"Palawa Joko": On this day, Palawa Joko will prove victorious!

"Palawa Joko": Turai Ossa, you are the victor. I, Palawa Joko, scourge of Vabbi, yield to you!

Zilo the Drunkard: I don't have any drinks for you. This trusty keg here is for me alone. Slip through the party and nab drinks from the willing. If you can imbibe 12 mugs before I finish this keg, you win. But trust me, you don't have a chance, lightweight.

Zilo the Drunkard: Give up now, amateur. You'll never beat me!

Zilo the Drunkard: What? You *hiccup* beat me? My pants off to you. *hiccup* Now if you'll *burp* excuse me...I have to attend a meeting betwteen an empty *hiccup* bucket and tonight's dinner. *burp*

Zilo the Drunkard: I love you, man!

Prince Ahmtur the Mighty: The flaw in Palawa Joko's invasion of Vabbi was that he outran his supply lines. Once Turai Ossa flanked him Palawa's forces were doomed.

Prince Ahmtur the Mighty: What's that?

Prince Bokka the Magnificent: Don't be a fool, Goren. There are no harpies anywhere near here!

Norgu: Of course, you have been wrong before.

Prince Mehtu the Wise: Everyone move to the exists in an orderly fashion! There is only one of them! This is not the time to panic!

Prince Mehtu the Wise: Very well! This is now the time to panic!

Prince Bokka the Magnificent: What a mess!

Prince Ahmtur the Mighty: Yes, but the question is- why would the Skree Harpies attack here?

Prince Mehtu the Wise: All i can say is- thank the gods for Warmarshal Varesh!

Prince Mehtu the Wise: If the harpies are raiding, we'll need all the troops she can spare!

Prince Ahmtur the Mighty: True. Excuse me. I need to check in with my forces.

Prince Mehtu the Wise: Yes, I had best get back as well. Will you be joining me, Daughter?

Tahlkora: I have made my own arrangements, Father.

Prince Mehtu the Wise: I see that you have. We will speak of this, later.

Prince Bokka the Magnificent: And I had best get back home as well. The new theatre season is about to start! Goren! Fetch my sedan chair!

Kehanni: Let them go. You've broken the ice. I have some leads that we should follow up on.

Warning: The following text contains spoilers relating to the plot of Nightfall campaign.