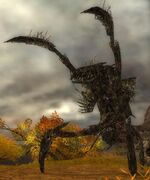 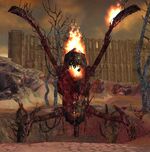 Burning Effigy of a Titan found just outside Nolani Academy

The Titans are a powerful and ancient race of destructive creatures, nearly as old as the Forgotten. They are spirit-like in their true form, but manifest in the most dominant aspect of their surroundings. They are locked behind the Door of Komalie on the Ring of Fire Islands. The Titans submit to the wielder of the Scepter of Orr.

It appears that the Titans once walked the surface of Tyria prior to the events of the present day in the game. In particular, the Charr are aware of the existence of the Titans, and worship them as gods. In several points in the game, the Charr can be seen building effigies of Titans, for worship or to instill fear in the humans of Ascalon. The game manual that came with Guild Wars Prophecies also says:

"Whenever a large Charr warband travels anywhere, they take with them a bronze brazier, lit at a Flame Temple by the Sacred Flame. These braziers are placed upon palanquins, which are then carried from location to location by four Charr Flame Carriers. Each night when they make camp, the Flame Carriers erect a flammable effigy in the shape of one of their gods."

Such effigies can be seen, for example, north of The Great Northern Wall pre-Searing, and outside the front gate of the Nolani Academy during that mission. (see images) After the Titans are loosed upon Tyria, in the Titan Quests, the Charr take up active worship and servitude of the living Titans. In the quest The Last Day Dawns, the Ascalons expect the Charr to stand up to the Titans, but they just begin worshipping them and fighting alongside them.

At least some Titans are followers of Abaddon who dwell within the Realm of Torment.

In one of the Realm of Torment quests, (A Flickering Flame) it is revealed that the Charr have somehow been deceived by Titans who took advantage of an old Charr prophecy to be considered as their gods.

It is later stated by a Forgotten NPC that Titans are twisted souls. The meaning of this is not known.

Players should be careful when engaging Titans, as fighting Titans requires resilience and patience. Upon slaying a Titan it will spawn lesser creatures and upon slaying them, they will spawn even more. Fighting a single Titan could take several minutes just to kill it and all its spawns.

There are four major types of Titans in the game right now, each type spawns different creatures. This is a hierarchy of Titans and their spawns:

For a full list of Titans in the game, see category:Titans.