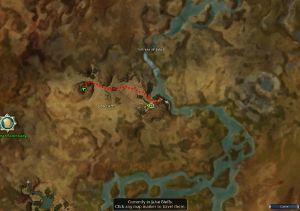 Elder Suhl in the Consulate

The Council is Called

"Istan must prepare for the inevitable. Your Sunspears are doing a commendable job of keeping Varesh occupied, though it is only a matter of time before she turns her gaze towards Istan. You must go to Vabbi and convince those corpulent princes that this is their war. Do not fail us as Kormir did. You must be the light against which the tide of darkness will break. If you need passage back to Kourna, Dockmaster Ahlaro will assist you."

Accept: "To Vabbi!"
Reject: "To the nearest tavern!"
When asked about quest: "Perhaps Dunkoro has a plan. Best to seek his counsel."

"We must go north through the Fortress of Jahai to reach Vabbi. There the mountains narrow and the Elon falls over the first Great Cataract. Once it was a clear passage, but the Kournans have built a fortress there, and control the road. We need to find a way through it... or around it. Just remember to keep an eye on Nerashi; her impulsive actions have a tendency to draw attention."

"Dunkoro said what about me? If anything, his harebrained schemes are liable to backfire on us more than anything I do. Well, let's waste no more time with idle chatter."

Nerashi: "There is Jahai, built where Turai Ossa defeated Palawa Joko. It looks to be superbly guarded."

Nerashi: "Gods! This place is bursting at the seams with troops! There is definitely no way through."

Kournan Guard: "Move it, Centaur scum!"
Mirza Veldrunner: "My pride will not stand for this!"
Nerashi: "I know that Centuar! That's Mirza Veldrunner! They must have captured him and his warriors."
Nerashi: "They are treated as slaves, worked to exhaustion and then to death. What an atrocity."

"Well, that is worrisome. I can see that a frontal assault on a heavily fortified location like the Fortress of Jahai would be folly. I am surprised you made it back. You shouldn't worry me so!"

Talk to Dunkoro in the Command Post. Then head out to Jahai Bluffs and talk to Nerashi right outside. Scout the 3 locations, then walk back a bit and kill the Kournan patrol.