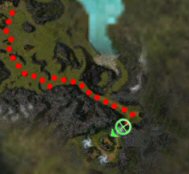 "Just before the plague creatures began their attack, Master Togo sent word that we were to meet him at the gates of Zen Daijun. He asked that you accompany us."
"Zen Daijun is just south of here. When you are ready, lead the way, and we will follow you."

"Well done, young one. I believe we have finally discovered the source of the plague here in Zen Daijun. When you are ready to enter the valley, speak with Brother Hanjui and he will let us past."

"Oh dear, dear me! Please... you must not travel into the valley! Perhaps you have not heard the news yet, but a horrible plague has infested the entire valley. Many of us who live there were forced to flee. It was awful, just awful! Dwayna protect us!"
"If Master Togo has faith in your skill, then so must we. Let me know when you are ready, and we can head into the valley."
"If Master Togo has faith that you can destroy the afflicted creatures plaguing the valley, then I do too! After all, when has the Master ever been wrong? Never! As far as I know, anyhow."
"However, I beg of you to remain on your guard at all times. Many of my brethren have already perished within, and I would hate for more lives to be lost to this horrible plague. Was there anything else you wanted to discuss?"

"My fellow brothers and I are grateful that you have brought help. Balthazar grant you courage and strength in these difficult times."

While engaged in this quest, you will have four extra NPCs. This extra firepower offers enough force to finish many of the quests in the area with relative ease. Please note: If they die you will have to rezone. (You can complete the quest with just Su left alive.)

Su often gets stuck behind Miller Quang, you may want to be wary of this, and this is where she will probably be if you are outside of Zen Dijun wondering why the quest has not been completed.