Tomb of the Primeval Kings

"Tombs" redirects here. For the PvP tournament that used to be housed at this location, see Heroes' Ascent.

Warning: The following text contains spoilers relating to the plot of both the Prophecies and Nightfall campaigns.

Legends remain of noble spirits who stand watch over the tombs. If there is a passage between the mortal world and the Underworld, surely such spirits would know how to find it.

The Tomb of the Primeval Kings was where the Primeval Kings of Elona were buried during the Primeval Dynasties. The Tomb was used until 652DR, when the Scarab Plague wiped out the population of Istan including the Primeval Kings. More than 300 years later, in the year 1051DR, Lord Odran opened several portals to the Rift, including one from this Tomb, and additional portals at the Tombs of Drascir, Heroes' Ascent and other areas on Tyria. Mortals, gaining access to the portals after Lord Odran's death, traveled into the Mists in order to earn the Favor of the Gods by winning combative tournaments against one another. 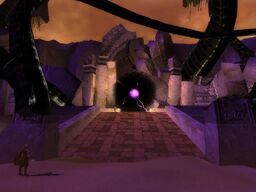 The famous golden arches now in ruins, the Tombs lie shattered and corrupted by the Darkness that sought to destroy all of Elona.

This arrangement lasted 200 years, when in 1272DR, just after the Wintersday celebrations, the forces of Dhuum and Abaddon, led by Menzies' generals, interrupted the tournament. These combined dark forces fought against and defeated the spirits of the Primeval Monarchs, along with Warmarshal Turai Ossa and Lord Victo (from the Tombs of Drascir). Eventually these forces managed to seep through the portal into the mortal world. By this point they had attracted the attention of both the Zaishen Order and the Order of the Sunspears (which at the time counted Dunkoro's son among their ranks), who attempted to fight back the darkness.

As compensation for the destroyed tournament grounds the Zaishen offered access to their home, the Battle Isles, to all the stranded fighters. Another portal opened by Lord Odran is located on the Battle Isles giving access to Heroes' Ascent - allowing the Global Tournament to continue.

Anyone who wishes to try fighting the evil forces that destroyed the Tomb of the Primeval Kings may come here to earn powerful rewards.

This is a list of all the known ancient monarchs who were buried here:

The Darknesses are a race of powerful Mesmers who act as generals of Menzies, but cannot be found in the Fissure of Woe. They are led by The Greater Darkness, who, after Abaddon's defeat, serves Mallyx the Unyielding. Three of them led the attack on The Hall of Heroes. A few months after that, the Fury would lead the forces of Dhuum on an attack at the Dragon Festival of 1382CC.

From The Dragon's Lair, exit to the north.

The Ruins of the Tomb of the Primeval Kings is a set of four explorable areas that offers challenging monsters and unique items. The Ruins are often referred to as the new Underworld in reference to the name of the first of the four maps, the fact that it was introduced after the "old Underworld", that the "old Underworld" was closed off during the weekend when the Ruins was first introduced, as well as creatures from the Underworld that plague the levels of the Ruins. The ruins may also be considered "Nightfallen" because they were changed in the same way that "Nightfallen" lands in the Nightfall campaign were.

The Ruins are divided into the following levels:

Creatures also found in the Underworld:

Unique to the Tombs (equipped with Fingers of Chaos)

The Ruins vs The Underworld[edit | edit source]

The ruins share similarities with the Underworld as well as some differences:

In Grenth's domain, one can complete quests and move around the territory in order. In ToPK, to move forward (to the next zone), the team must kill all visible groups and any buried Chaos Wurms. (Pop-ups do not need to be killed, whether triggered or not.)