From GuildWiki
(Redirected from Tombs of Drascir)
Jump to: navigation, search 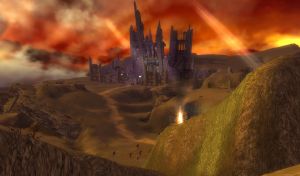 The ruins of The Academy of The Arcane Arts, also known as the Royal Academy

The city of Drascir, former capital of Ascalon, lies far beyond the protection of The Great Northern Wall, due north of Surmia. It fell into the hands of the invading Charr years ago.

Drascir was also known for its Academy of the Arcane Arts, the sister academy of Nolani Academy.

As described in the Lore, the Tombs of Drascir, eternal resting place for the ancient kings of Ascalon, were once used as a portal to the Hall of Heroes. It is unknown whether the Tomb of Drascir is located in the city of Drascir, or somewhere further north.

In the Ruins of Surmia Mission, after the players free Erol from his prison, he explains to Prince Rurik that the rest of his unit is still being held captive by the Charr in Drascir. Rurik then wants to head for Drascir and free them.