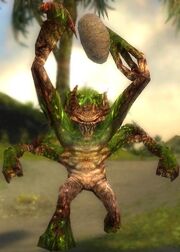 The Oakheart, a typical Tree

Trees are living plants. They are large, slow, tree-like creatures, similar to Tolkien's Ents. Trees are usually Monks or Rangers and, in combat, will hurl large rocks at their opponents, as well as creating a variety of nature-based spirits. Like all plants they have reduced armor against slashing damage and fire damage. Trees are considered fleshy creatures.

Note: Their appearance is similar to the Druids of the Maguuma Jungle.

They can be seen lumbering about in the wooded areas of Tyria, often in the company of other wild creatures (such as Ice Imps). Specifically, they can be located in Pre-Searing and Post-Searing Ascalon, the Maguuma Jungle, Kryta, and the Southern Shiverpeaks.