From GuildWiki
(Redirected from Troubled Land)
Jump to: navigation, search 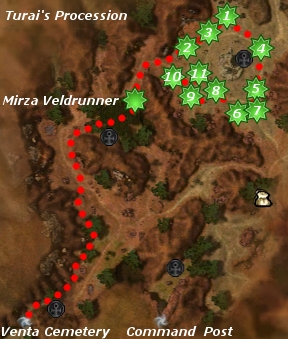 A Bushel of Trouble

"More terrible news.... The demonic corruption has spread to the nearby lands in the east. They have been touched by an evil more potent that we have ever encountered. Our only hope is to seek out the source of that corruption and purify it before it spreads further. Its existence is putting the Ancestor Tree and the entire village in danger.

I offer you this seed, a blessed piece of the great Ancestor Tree. Although it may look like nothing more than an ordinary seed, the lifeblood of our pride is encased within. Defeat the tormented lands to the east and drop this Sacred Seed by their corpses; it will purify them and return them to the ground."

Accept: "I will not return until the lands are purified!"
Reject: "Magical twigs and purifying corpses? Where do you people come up with this stuff?"

"The pride is grateful for what you have done. Although one source of corruption is gone, I fear there are others. The roots of this scourge are ancient, perhaps deeper than those of our Ancestor Tree."

Pick up the Sacred Seed. Go to the center of the zone (follow quest marker). The Tormented Lands are level 24 elemental warrior creatures that should be approached with caution. As they die, go over their disintegrating corpses and drop the seed. If done right, the seed should start glowing on the ground, the corpse will disappear, and you should get a confirmation sound that you have purified one of the tormented lands.

As soon as you have purified 10 Tormented Lands, the Earthen Abomination will spawn nearby. Kill it and then purify it by dropping the seed. Then go back to Mirza for your reward and the next part of this quest chain, Ancestral Anguish.