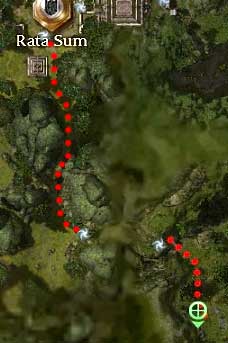 "Here's how it is: you know about the Unseen Ones? That's what the White Mantle called the Mursaat. We thought them gods. I think they thought themselves divine as well, until the Titans nearly wiped them out.

One of the few survivors, Lazarus the Dire, cursed me. So I ran, and am trying to remove that curse, using a book called the Grimoire Arcanum. The search brought me here, but I was too late. One of my former brothers in the White Mantle got here first and snatched the book.

If I don't get that book back, I'm doomed! What say, will you help a brother who is trying to get back on the side of righteousness?"

Accept: "The path to righteousness is this way."
Reject: "That's what you get for playing with Mursaat."

Justiciar Naveed: "Here. Let me see your map. I will mark where they were headed. Now hurry. Help me!"

"This is it! I only hope the magic contained within can provide a cure. It's no simple curse I am under, friend. Lazarus the Dire hid from the Titans by breaking himself into aspects and and infusing them into me and my friends. We thought it was a gift of power, but we were merely used to insure the survival of Lazarus. Now that someone has dealt with the Titans, Lazarus has begun restoring himself. Reclaiming those aspects... unfortunately... claims the life of the host. I am the last, and that is a fate I am not eager to share."

Justiciar Naveed is just outside of Tarnished Haven. Pick up the quest and head for the place indicated on the map with the quest marker. It may be easier to first map to Rata Sum and get to the White Mantle via Magus Stones instead of crossing Alcazia Tangle. Defeat the group of White Mantles and retrieve the item from a chest nearby (it is not locked). Map travel back to Tarnished Haven and exit to get your reward from Naveed.