Note: Tyria and Elona are adjacent to each other as parts of the same supercontinent.

The Tyrian continent is the location where most of the Prophecies Campaign took place. The earliest known intelligent life began on Tyria 3000 years ago, though there are signs of creatures estimated to be from roughly ten thousand years ago. It is also known that the Gods of Tyria used to live in Tyria (in the present-day ruins of Orr) for some time prior to the Exodus. The official calendar in Tyria is the Mouvelian Calendar. Tyrian signs indicate they use a language not from Earth with a rune-like writing system, however all NPC speech is presented in the user's chosen language, and signs have a translation as their 'name'. 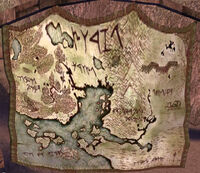 In-game Map of the Tyrian continent, found in the Diessa Lowlands

Tyria contains many Regions that vary greatly in geography, and civilization.

Regions accessible in Guild Wars Eye of the North:

How Do I Get There?[edit | edit source]

You start off on the continent of Tyria if you create a Prophecies character, but if you create a character in Cantha or Elona, you will have to unlock travel to Tyria via the appropriate quest.

Likewise, you can travel to Elona or Cantha from Tyria if you have their respective campaigns, Nightfall or Factions.