The Ullen River (known by locals as the Dark River), originates from the farthest south of the Twin Serpent Lakes. The River flows west past Riverside Province into the jungle, then turns decidedly south parallel to the Henge of Denravi, and ends at the marshes of Tangle Root. It is called the Dark River not just for the darkness of the passage through the cliffs but also for a perceived darkness that shrouds this river. 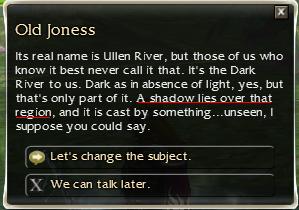 Old Joness, saying that there is a shadow above the river.

Image of the shadow, on the tangle root side of the river.

Mysterious Shroud over Ullen River, supposedly covering the hidden Mursaat city. This is on the Riverside Province view of the river.

Old Joness says it's cast by something "unseen."