The Underworld Vengeful Farmer build can be used to farm the Bladed Aatxe, Grasping Darknesses and Smite Crawlers. It mainly uses the Item Spell Vengeful Was Khanhei(VWK) to preserve health and damage all attacking opponents. 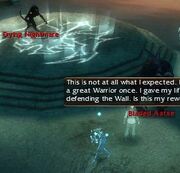 While behind the NPC the Aatxe cannot hit you, giving you time to deal with the Nighmare.