I never thought I'd ever end up a wikipedian, but man, here I am. And if that is not weird, I'm already getting flames. Clearly, on all counts, I am win.

Backed up to test latar.

This build is intended for quick and direct farming of bosses. It relies on the normal 55 standard and very high health regeneration for healing and damage reduction. Essence Bond and Balthazar's Spirit provide energy for the consistent spamming of regeneration skills. The main damage comes from Spoil Victor and possibly one Touch Attack. This build allows the user to charge directly for the boss monster and ignore the boss's mob.

The [Build:N/Mo Boss Farmer|Boss Farmer build] has been proven to successfully farm the following bosses:

A build using energy denial to shut down opponents, while dealing damage in the process.

Note: Your stats can be modded to more once you get there by putting on superior runes such as superior smiting and superior protection to get 16 smite and 12 prot

Monk/Ranger This position is responsible for

Monk/Necro This position is responsible for

The Theory behind the Monk/Necro[edit | edit source]

A thing I have noticed is if the Monk/Necro has 60 Dp Spirit bond + Protective Spirit on him will heal him for 10 health with symbiosis down and 1234 health but this is the only case when symbiosis is down that you will be healed from spirit bond When Rotscale is using his Breath Attack. Which is why if your under 60% DP You need to have it drop before you start letting Rotscale use his breath attack on you.

Use 2 monks and 1 ranger, have the ranger be the runner and use symbiosis while the Monk/Ranger just bring more bonds for extra health in the ranger skill places.

Advantage to this: Beast Mastery can be set to 16 and give more health making it go a little faster

Disadvantage is: you have 3 people going for the same Green rather than 2 so you have to do more runs if your splitting them 3 ways. Also it isn't that much faster to where the Bows per hour increases.

For the Monk/Ranger it makes it go quicker if you have higher points in smiting Prayers, but I left a superior rune off of the attributes because when running it you need as much health as you can get. Apply additional Superior Runes before you attack Rotscale because the Attributes above are just the minimum.

For the Monk/Necro A thing I have noticed is if the Monk/Necro has 60 Dp Spirit bond + Protective Spirit on him will heal him for 10 health with symbiosis down and 1234 health but this is the only case when symbiosis is down that you will be healed from spirit bond When Rotscale is using his Breath Attack. Which is why if your under 60% DP You need to have it drop before you start letting Rotscale use his breath attack on you.

For the Monk/Necro The Easiest Way I have found to keep from dying when symbiosis drops is have the Monk/Ranger tell you when it is recharged and you will know you have 42 seconds before it drops. Cast Grenths Balance on Rot for a full heal Pull back and get him set up so he is using the Breath Attack then keep casting Protective Spirit and Spirit Bond getting the additional health from Divine Favor and whatever you may be getting from Spirit bond. And when Symbiosis wears off your health may be low but you will live and it will heal fast with Spirit Bond Plus Life Attunement

In Extreme Cases such as when Rot is in the very corner and obstructed you can spawn the smoke phantoms run back and kill them and use the opposite corner at the top of the hill so he isn't obstructed but still far enough away to use his Breath Attack but this takes along time its better just to rezone for a better spawn.

This build is designed to farm the City of Torc'qua with just two people to get Margonite Gemstones and other items.

NOTE: The tank must have rank 4 lightbringer or higher or this build will not work. 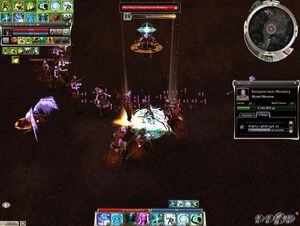 This build in action 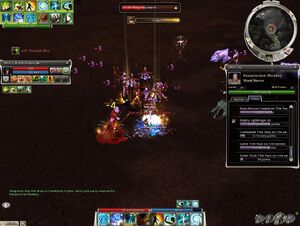 The "Fear Me!" variant in action

To effectively use this build, it is advisable to set the button to use "Fear Me!" to something easily pushed. This variant of the build only works in the City of Torc'qua or any other place with massive (20 or greater) mobs. The main advantage to this over the Visage build is that it does not require melee attackers to energy deny. If you have Lightbringer rank 5 or higher, replace Mending with "For Great Justice!" or Blessed Signet. Auto-attacking is also a good idea to more quickly gain adrenaline for "Fear Me!".