Pure as a baby's heart.

I just realized how wtfomgroflolzcopterfuckin'prwnageshit your userpage really is.--

I painstakingly copied it pixel by pixel from a Link's Awakening ROM; I wish I could make it transparent though. D:

Stab the little dogs too; they never appeared in another LoZ game though. D:

Or kick chickens. It's fun kicking one all across Bowerstone! ---

Meh, it's not like it's expensive. At least not the stores where I buy my games from. --

I want my Link's Awakening ROM.

Hello, I see you changed my anomaly edit here. That is fine as I am not as fimilar with this wikis rules; however I wanted to pointout this and the discussion under Ear Bite here. I am not opposing yor change I am, just making you aware. :o) Thanks --Shadowphoenix 02:58, 26 March 2008 (UTC)

Well, it's like this. You are correct in saying that it's an anomaly, because an anomaly is defined as 1. An irregularity or misproportion, 2. Something that is strange or unusual. But when we call something an anomaly here, and use the anomaly template, it refers only to anomalies within a skill's function. So while the icon is definitely weird and ought to be noted (and I think it was noted a while ago, but removed at some point?), we wouldn't use the anomaly template for it.

Ok, thank you for eloborating on that. I am sorry, I do not fully understand this wikis rules yet. Thank you for informing me. Have A Great Day! --Shadowphoenix 04:11, 26 March 2008 (UTC)

No problem! One other thing of note, though- somewhere in our policy pages it states something like "We are not A-net." By an extension of that, we are also not the official Guild Wars Wiki. That means that certain things the community of GWW feels should be in articles may not belong in our articles for the same reason. Therefore, while I hope I'm not discouraging you from contributing, I would suggest that you give an article's talk page, and possibly revision history, a very brief glance before adding information listed on GWW that you feel should be included here as well. And also, you have a great day too.

Yeah, I did! I liked the penguins and tufted puffins the most, as always. :D

I am winz of wiki!

I do indeed, and I shall give you my name thing now, but then I'm going to bed. Long day, exhausted.

Saw it already. Looks nice, though. 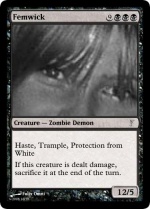 Hiss! Ah well, I should have guessed. —

You are quicker than me[edit source]

Rise, my son, for you are the new generation.

Nope, I'm one of the oldest members- 19 in a couple months.

Maui = sock? :O Or is it some weird, unknown reason you're making subpages udner her name? ---

I asked him to, I'm hopeless with templates.

Maui's her own sockpuppet too, didn't you hear? --

I was soundly defeated. ;-;

Modesty. I like that in a man evil soul-devouring fiend.

If we translated that horrific discussion... What exactly would you be proposing? ;]

That's for me to know and you to find- um. Not know.

But you are much leeter than I am. ;-; You know how players always go for the Lich first in Gate of Madness, because he's the easier to kill of the two bosses? That's me! I'M THE LICH.

This is Hard Mode!

And that's why you can run people in Gate of Madness for obscene amounts of money! Idiots...

Pick a mission, and there will be people wanting runs. :s So much for playing the game.

I second the motion. Except I'm not leaving. I'm back. Meanie.

MediaWiki talk:Monaco-common.css: are you trying to incite the wrath of the gods? :D

Eh, whatever. They can go picnic by themselves.

can i return my points for quarters --

Useless, every one of you.

Don't sweat it, I understand it's been a stressful day for you guys here. No offense taken. The Gaming guys and Tech team have been working hard at solving any issues that have come up during the merge, so feel free to mention any (more) problems on the merge page.

BTW, Wikia also has a TYPE-MOON Wiki, just FYI since you are a big fan (-: It's relatively small though, seems to focus more on lore stuff than the games. -User:PanSola (talk to the

I would imagine some of the games' content would break Wikia's terms of use, ufufu. However, sweet and thanks.

Quite. GW:QDV though. We'll make a userbox when this is over.

You had deleted the text from his talk page, isn't it appropriate to undo the changes to the sandbox as well? Zulu Inuoe 08:42, 9 April 2008 (UTC)

If you're referring to how long the sandbox revert took -- my laptop kept losing connection, it was so large. -_-;

I just copy+pasted the previous revision.

I think it's okay. Still, the complete lack of sysops right now is irritating. I've been holding out on it for a while now, but I think it's time I fill out a Request for Adminship.

My thoughts on YAV are posted on that page's talk page. As far as objections well, nobody is perfect and there's atleast one admin which honestly shouldn't be there, so go for it brotha Zulu Inuoe 08:53, 9 April 2008 (UTC)

If you have issues with any of the admins, please contact me about it privately.

You got me man, I saw it all the time, and I finally decided I'd click it and I saw that red-headed lamer. lol Nice job, and with that, I'm headin' to bed, night and good luck with your adminship nomination.You deserve it. --Powersurge360 09:23, 9 April 2008 (UTC)

Never gonna give you up! By the way, thanks for being so open on the RfA; I don't think it even occurred to me before that I had been mistreating Blue. Goodnight.

You are now an admin. I wasn't aware that you were even interested in the job until I saw the RfA. In my mind, it's a no-brainer decision, and the comments seem to affirm that. Welcome to the team.

Oh, and please fill out your admin info at your earliest convenience. Thanks.

Thank you, everyone. I'll do my best.

Shadow phailed to be an amusing human being, /banfromlife imo. D: (but really i love him :])

Either death or unbirth.

I was going to make a crude yet sexy suggestion about where you could go, but it has very little to do with banning destinations.

Bah, I refuse to Congratulationse this nub! Hey.. wait! Noooo! —

Ok thanks anyway.
And wth is this?
"Sorry! We could not process your edit due to a loss of session data. Please try again. If you are still seeing this message, try logging out and logging back in. This may occur when an edit is left unsaved for a long time, or during server maintenance. If it continues for an extended period, please contact Wikia.
It's happened both times I edited this page. --Macros 21:32, 10 April 2008 (UTC)

I have no idea, actually. I've never come across that.

Maybe it's got something to do with monobook vs monaco, because I haven't encountered it yet. Screenshot next time.

I made a boo-boo and moved Ipo to [[User:Healing Ipo]] instead of User:Ipo/Healing Ipo and I can't fix it cause of server errors... HALP! --Powersurge360

It's funny because you are the one that said "...copyright laws, which we take very seriously here on GuildWiki..."

I in no way condoned that image.

Yet as a sysop you did not use your powers to delete it immediately either. ;)

I assumed good faith by not checking the image at all.

Then you failed at discretion, which trumps any policy.

Hmmm... Aren't we supposed to give the image uploader a notification of the unattributed image, so they can find the proper licensing tag to match? ;) ---

Orite, that's what I was planning to do.

Shure...but unless that was a totally free image or user created (lol?), I see absolutely no justification for a fair use tag and so it's freely deleteable anyways.

So I herd sarcasm dripping on the floor?---

Er, I did that manually. The comments at the top are the ones that are immediately visible on my userpage, so that's where new comments ought to go. =P

That's a bit odd, but I'll keep it in mind if your comments randomly start appearing in the middle of other people's. I think I'm going to bed, which I ought to have done hours ago. I'll be back on later today since I have no life; goodnight everyone!

That's because ECs don't occur when two people would make the exact same change. I suppose I am a bit amazing, though. /blush

That was the first template I ever made, and I hadn't realized something can be a template without being named Template:thing. I thought I moved it a while back, but I guess I was wrong. I shall take care of it soonly.

No, that was just a brief outburst.

"Felix used to appear inexplicably in areas such as User talk:Warwick; a recent bug fix seems to have corrected this." Rather harsh, tho. ---

Yup. But I didnt notice until now. There were some bolded pages in my Watchlist, and just saw this along em :P ---

I am wondering something.

Just curious as to why you deleted May's image. She is in GW right now asking me to re-upload it because she gets file corruption errors or something along those lines. What does Subject's Request mean? And what was the mis-attribution? Why was there not a 7 day tag placed on the image about the mis-attribution? Shouldn't the proper attrib be user created work? --

It was misattributed because it was licensed as created by "image uploader" when it was actually created by User:Maui. That's not why I deleted it; while Warwick was banned, Zulu said on the talk page that she requested the image be deleted, and Warwick did eventually MSN me, telling me to "just delete the damn thing." So yes, it was a user request; I was just being persnickety.

Stop hitting on my Failix with your sexy Italian or whatever. D:

YOU MADAM ARE WRONG. Also, Babelfish is not very good at translating.

NOOOOOOOOOOOOOOOO, I thought we had something special ;-; (oh and what about potatoes). You wil be mine one way or another *dramatic look at Maui* --Shadowphoenix 06:37, 16 April 2008 (UTC)

I'm too tired to fight over him, I'll go flip a coin to decide between Ruricu and Jedi. :P