An Elementalist build for farming Totem Axes from Root Behemoths in The Falls. This build uses Obsidian Flesh to defend against casters, and Fire Magic to deal damage.

Preferably a Spirit of the Forgotten, Totem Axe or Rajazan's Fervor and a focus item with +1 Earth Magic. eg Galigord's Stone Scroll, or crafted from Sheco in Bukdek Byway, or swapped for 5 Stone Horns with Denos Makaluum in Vasburg Armory. A possible alternative is a Fire or Earth staff with a +20% longer enchantments mod.

When engaging groups other than Wind Riders, a Fire wand and offhand both with 20% chance of halving recharge times(HRT)of fire magic are recommended.

It may be possible to get away with using an Earth Staff with +20% enchanting and HRT for the entire run.

Starting the run at Ventari's Refuge, head out to Ettin's Back. Equip your Earth magic headgear. Cast Glyph of Lesser Energy before casting Mystic Regeneration, Stoneflesh Aura, Flame Djinn's Haste and Sliver Armor. Run towards the portal to Reed Bog. Recast your enchantments as they expire. Use the Glyph prior to casting enchantments as it becomes available. Flame Djinn's Haste and Stoneflesh Aura can be kept up indefinitely, and for most of the run, the downtime in Sliver Armor makes little difference.

Take the south eastern path through the Reed Bog to The Falls. Once again, cast skills 1-5 in that order, keep running and recast enchantments as necessary. Stoneflesh Aura negates just about all the damage in this area. Head into The Falls.

Once again, use Glyph of Lesser Energy, cast your first four enchantments, and run. You can stop to recast even whilst in the middle of spiders and Shepherds. As long as you use the Glyph whenever possible, energy is not a problem. Mystic Regen will give you 9 pips off health regen, or 12 when you have Sliver Armor cast, so degen and damage is not a problem. If you are in range of a Symbiosis spirit, you will have 800+ health! 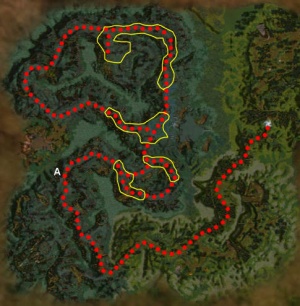 Locations where Root Behemoths can be found in The Falls are marked yellow.

Avoid these by running straight past them. It is unlikely you will be able to survive them in the large mobs that inhabit the area. Make sure that you do not get cornered by them, and just keep running until you lose aggro.

Tackling a full mob (or even 2 mobs) of Jungle Skale is little problem. Get them to bunch up as much as possible, and then get in close to one and cast your spells in the following order: Glyph of Lesser Energy -> Obsidian Flesh -> Mystic Regeneration -> Sliver Armor -> Immolate -> Flame Djinn's Haste. Cast Stoneflesh Aura to cover the short downtime in Obsidian Flesh. Recast your spells and Glyphs as they become available. Obsidian Flesh should be your priority enchantment, as the Skale will strip your other enchantments without it. A max damage fire wand can help things along nicely.

Keep your distance so that you don't cause any Life Pod pop-ups. Equip your Pyromancers headgear. Cast Glyph of Lesser Energy if you want to followed by Meteor Shower, Stoneflesh Aura(optional) and a few Immolates. Wanding helps again here. 1 Nuke and 3 Immolates later, your Behemoth should be dead.

Once your Behemoth is dead, you will almost inevitably have to run past it in such a way that the Life Pods will spawn and follow you. It is possible in some placements to run past the pods, or to avoid spawning them altogether, if the Behemoth didn't drop any loot you wanted. However, do not drag them into other mobs. Tackling 1 or 2 Life Pods is easy, but 3 can be more difficult. Careful advancement towards the Behemoth corpse and prompt running away can enable you to spawn just one Life Pod at a time. When facing one or two, the best thing to do is get in close, cast Flame Djinn's Haste and Immolate. This will usually kill single Life Pods or the first of a pair. If you have to run away, or you have spawned three, try to pull just one or two. Persevere and you should find one partially separates itself from the others. Get in quick and repeat the combo mentioned above to kill it before the others have a chance to heal it. They are also stupid enough to stand in a meteor shower a lot of the time if you don't mind waiting for the recharge before tackling the next Behemoth.

If you fight these without Obsidian Flesh active, you will die. Equip your Geomancers headgear. Cast Glyph of Lesser Energy and Obsidian Flesh before aggroing them! Much as with Jungle Skale, get in close and cast Sliver Armor, Flame Djinn's Haste and Immolate while Obsidian Flesh is up. Meteor Showers can help as well. Once Obsidian Flesh has run out, you can either run away, or try to exhaust your foes' supply of interrupts before recasting Obsidian Flesh. It is usually wiser to kill 2 Wind Riders at a time before running away. As you run away you will surely be under the effects of Conjure Phantasm, but just keep running until you lose aggro and then heal.

Wind Riders, if given the opportunity to cast anything other than Conjure Phantasm on you will usually kill you.

The Death Farmer is a Necromancer build specifically designed to take on large mobs of adversaries that primarily use melee attacks. It is especially efficient at defeating Mountain Trolls at Droknar's Forge, but also works on other mobs, and with variations, can be built to farm Minotaurs, Trolls, and even various Assassin creatures throughout Cantha.

In order to properly use this build most effectively, you will need to learn how and when to properly cast. The basic principle is to cast Enfeeble on a target, followed by Virulence, and Epidemic to spread the -8 health degeneration to the surrounding creatures, all the while keeping your armor up with Physical Resistance, and occasionally leeching some life by using Oppressive Gaze. With this build you will be able to farm groupings of 10+ without triggering scatter, meaning that you will be able to farm large groups without getting some to pull off as with builds that use AoE to farm large groups of creatures. Oppressive Gaze will occasionally scatter these creatures, but in some cases it is necessary to do so in order to stay alive. Channeling will be used as a tool for energy-management, and Shadow of Fear is used to slow down enemy attacks so that Blood Renewal can keep your health increasing.

The Midnight Solo is one of a very few builds centered around the Mesmer elite skill Signet of Midnight. This solo build will work on all Warrior bosses located in the Jade Sea. It should be applicable to most Warrior and Assassin bosses in other areas, as long as you isolate them.

This build has been proven to work on:

This build focuses on blinding the target and uses failure hexes to get energy as well as deal some damage. With a high chance to miss with attacks (25%+25%+52% from hexes and 90% from blindness) the target will simply never hit you with an attack. Mixed with -9 Health degeneration this build is very effective and can kill almost any Jade Sea Boss in 60 seconds.

The usage is very simple.

This build is designed not only to handle killing Lost Souls outside of your Junundu wurm (and getting back into another wurm safely), but also to kill Maddened Spirits 1 on 1 outside of the wurm. It may be used for quickly farming the Ancient Armor Remnants which drop randomly each time you kill a Maddened Spirit or Lost Soul, or if you're patient and have a strong bladder - for taking the high score in the mission. It is *only* fit for the Remains of Sahlahja challenge mission.

There are three parts to using this build properly:

Wait for a single Maddened Spirit to approach you. Hit it with Vampiric Gaze, then hit Blood Renewal and "Can't Touch This!" as it closes in. Immediately start spamming Blood of the Aggressor, Blood Drinker, and Vampiric Gaze as they recharge. As soon as the Maddened Spirit loses more than 50% of its health, hit Signet of Lost Souls and resume spamming. You might also want to hit a nearby Infestation with Life Transfer for healing instead of Blood Renewal - if it's been wanded a few times you'll also get the Soul Reaping bonus.

As soon as the spirit dies, hit a nearby Infestation with Life Transfer and wand it to heal up while regenning your energy. Make sure to use Signet of Lost Souls on the Infestation once it gets under half health to help regen energy. Kill one or two Infestations while waiting for the next spirit to arrive, but make sure not to spend much energy on them - you'll want full health and energy for the next Maddened Spirit.

Once you get your score around 100, the spirits will begin spawning quite a bit more quickly. If you get behind and are about to get two of them attacking you, run to the Wurm Spoor and enter your Junundu wurm. If you can hit "Can't Touch This!" just before entry, you'll be protected for a bit as you get inside the wurm.

Most Lost Souls spawn in locations where they are easy enough to just smack with the wurm. Junundu Bite does the trick in one shot, and you can get the extra heal if you use Junundu Tunnel to race up to them.

A few of the Lost Souls are on rocky terrain, however, so the wurm is useless. Get well ahead of the Maddened Spirits and exit the wurm. If any Maddened Spirits are nearby when you exit, immediately hit "Can't Touch This!" then "Fall Back!" and run towards the Lost Soul. Run as far as you can with "Fall Back!", past the Lost Soul if possible, but not out of casting range from it. Hit it with Life Transfer, then continue running to the next Wurm Spoor, using "Fall Back!" when available. At 16 Blood Magic, Life Transfer will kill the Lost Soul by itself. As you approach the next Wurm Spoor, use "Can't Touch This!" to protect your transition as you jump back into the wurm and race off.

For the most part, the basics of Junundu usage are described in the Remains of Sahlahja and the Junundu article. Here's a few additional pointers specifically for this farm:

This build utilizes the elite Shadow Arts skill Shadow Form and the earth magic skill Sliver Armor to quickly take down bosses that are accompanied by medium/large mobs to efficiently farm their green items.

This build utilizes the elite Shadow Arts skill Shadow Form and the earth magic skill Sliver Armor to quickly take down bosses that are accompanied by medium/large mobs to efficiently farm their green items.