New proposed boxes for the Skill Hunter titles are up. What do people think? I realize the three campaign boxes use the same background color, but that is one of the hardest things to come up with (it alternates between that and the icons themselves). Comments? --Rainith 22:33, 27 April 2007 (CDT)

Update - All new boxes done. I still want to try a "flipping" of the icons for the skill hunter ones (Mission icons on top of the SoC icons as opposed to the current SoC on top of the mission icons), but I'm tired of working on this tonight so that will have to wait until tomorrow. I've also altered the color scheme of the boxes for title tracks that now have "legendary" titles. Since I was using the same color for the legendary boxes, I wanted to use the same color for the lower tier titles too.
As always I'd love comments. --Rainith 23:00, 1 May 2007 (CDT)

Great work as always. I'm a bit sad that the HM Guardian Icons are the same in 2 boxes, but really, you can only have so many ideas... I don't like the Vanquisher ones too much. The "Hard Mode Effect" is OK, but the "1, 2, 3" is a bit to... simple. And too small. at least make them a bit bigger.
And a question. Why are the new boxes in your userspace, and not in the Template space? :P You'll move them or what? ;] — Poki#3

First a note that I've uploaded new images for the skill hunter titles. I like these better than the other ones I had there. As always comments are welcome.

Poki, thanks for the compliment. :) If ANet had made the HM mission completion icons different for Factions and Nightfall, I would have used different ones, but they didn't and I just used what was available. I too would like a little more differentiation between the two, but I think the color of the box does that okay. As for the Vanquisher ones, I can make ones that have larger numbers, the ones they have now are the same size that you get when you are playing the game and kill enemies there (original image from Smurf can be found here). If I do increase the size of the number should it stay in the same location or move somewhere else in the image (and where should it go if it moves)? If you have an idea for a different/better image to use for these, let me know. I'm honestly not thrilled with them myself, but I don't have any better ideas. :(

The titles are currently in my userspace as they're "in testing" at the moment. Keeping them in my namespace means that I don't have to worry much about people changing them up while I work them into what I want them to look like. Or if anyone does I can tell them to back off. ;) I did the same thing with all the other title boxes (except the Sweet Tooth one, that one I knew exactly what I wanted and had it done much quicker than even I thought I would). By the time I finished the original batch of title boxes a dozen or so people were already using them. :) I don't think these will be in my userspace beyond this weekend, unless a bunch of people start complaining they don't like them. --Rainith 21:42, 2 May 2007 (CDT)

@Skill hunter. Better, better, but still something is missing IMHO. Could you try the SoC as a background, and using Outpost icons instead of Mission icons, and see how that looks like?
@Guardian. Thought the same _^_ Also, something bugs me about the Legendary Guardian. The usage of the Skill icon is fine, but i think a small tweak is in order. I uploaded Image:GuardianTitle.jpg. What do you think about it? Maybe a small (1, 2 px) black border is in order :/
@Vanquisher. I know it's from the game, but how bout trying to replace the small numbers with bigger ones (maybe a different font?) or with letters P, F and N? ^^; ...yeah, I have no idea _^_
— Poki#3

Skill hunter - Tried that previously (that was actually my first idea). Nightfall looked okay, but the small dot from Prophecies looked just like the circle in the middle of the SoC icon and the Factions icon's color blended too well with the SoC (I think the Factions mission icon has this problem too, but not as bad).
Guardian - I don't know if that makes much of a difference, but I can try to play with that some. Maybe make a gold border (elite style) to go with the gold box?
Vanquisher - I can try something like that, a semi-transparent 1, 2, 3 or P, F, N full size in the center of the image might work. I'm not going to do it tonight though, as I am just too tired (damn you work *shakes fist*). --Rainith 22:07, 3 May 2007 (CDT)

I think I'll have time to update these tonight, if not, the next chance I get I'll just move them "into production" and others can make whatever modifications they deem necessary. --Rainith 12:00, 11 May 2007 (CDT)

Ok, I've updated the images for the individual Vanquisher titles and the Legendary Guardian title based on Poki's suggestions. As my available time is quite limited currently, I'm going to move these into the main namespace now. That doesn't mean I don't want comments/suggestions/etc... but I do want these to be more available for people to use. --Rainith 21:32, 11 May 2007 (CDT)

Some of the boxes don't have the title (Protectors, Guardians, Legendaries). The code looks good to me, so is that because I'm just a coding newbie, or because the fond turns out small? — Poki#3

??? Huh? "Some of the boxes don't have the title (Protectors, Guardians, Legendaries)."? That doesn't quite make sense to me. Did you mean it doesn't look like some of the are bolded (as the section header is "Bold?" that is my best guess). If that is what you're asking, then I'd say you just need to look a little closer. :P To make sure all of the boxes were the same size, without going to five lines per box, I had to cut the text size down a bit. The smaller text size may make it somewhat harder to see the bolding, but it is there. If you were trying to ask something else, please try asking me again, as I may just be being dense here. :) --Rainith 00:57, 16 May 2007 (CDT)

Well here is a shot of what it looks like to me at home (of course, since I don't have a CRT here at home, I don't know if it will be viewable on a CRT but hey...): 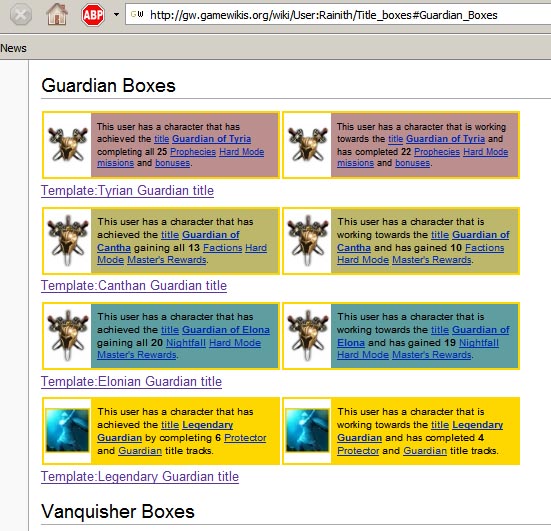 As (I hope) you can see, both the title and the numbers are in bold. I also did a little testing at work, replacing the wiki markup with html markup and neither seemed to work. It may be that at that size of text at that resolution, the bolding just isn't visible. --Rainith 21:33, 16 May 2007 (CDT)

I never really paid attention to the title templates since I don't care much about user boxes, but why do some require both the title name and the user's point value? For example, {{Champion title|Vanquishing Champion|9,999}} instead of just {{Champion title|9,999}}? You can figure out the title based on the points. --Fyren 21:50, 16 May 2007 (CDT)

I'm thinking that it's so that the box doesn't need to be updated every now and then when new tiers roll out :P — Poki#3

True, but after some tinkering with parserfunctions I couldn't get it to work. Weird #### happened on some of the boxes (having to use font color="" on the Protector boxes comes immediately to mind) and as I was able to get them to work adequately I was okay with it. If you wanted to take the time to drop some learning on me about getting it to work (and if you would entertain the possibility of releasing just that specific template work to GDFL), that would be great. Otherwise, as I said, they work adequately and I may at some point be able to figure out myself what I am doing that is wrong and change them.
Funny thing is personally, I don't care so much about userboxes. It was only at some point after both userboxes became popular here and the titles were added to Guild Wars that I thought title boxes would be a good idea. At first I figured that either I'd make one or two and others would populate the rest or I'd make the ones that I was going to use for my characters and no one else would even bother with them. Then somehow, I became "the title box guy" go figure. :) --Rainith 22:05, 16 May 2007 (CDT)

Hey, haven't seen any of the EotN reputation title's boxes on here, just wondering if you've thought about doing some? I'm a little obsessed with having a title box for everything on my page, and yours are great! So if you haven't thought about it, I say go for it, as long as it's not too hard to code them >.> though I'd think it'd be about the same as the faction title boxes. --Cynn 17:09, 7 October 2007 (UTC)