Vael appears seemingly out of nowhere in Grothmar Wardowns. He appears to know a bit about the character, but reveals very little about himself, other than that his favorite color is Sage Green.

Vael appears to be wearing the armor of a warrior, but he is an assassin. 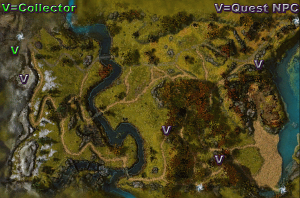 Note: At this first encounter he does not give any quests and he won't spawn again upon entering Grothmar Wardowns the next time. In order to make his quests available, you have to complete The Missing Vanguard first. Then you'll have to find Vael for Be Very, Very Quiet.... After this Captain Langmar will give you further quests involving Vael.

You have earned my respect, friend, in more ways than one. While we may never be able to grow old and stitch quilts together, I will try to stick to jobs that do not put me on the other side of the battlefront as you. But I offer more than mere friendship. This is a mask of the Mo Zing. These masks are wielded only by travelers that call no man or woman their master, and I know that to be true of you. Alas all things come with a price, even between friends, a triffling [sic] thing really. Bring me 250 Superb Charr Carvings in exchange for my masks. Trust me, it's worth it.