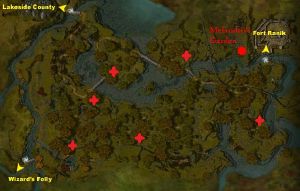 "These bandit attacks are getting ridiculous! Frankly, I don't care if their motives are greed, politics, or anything else, I just want them gone and out of our hair! I'm fairly sure if we take out their leaders, the rest will either flee or be too disorganized to pose a serious threat. If you are up to the task, go to Regent Valley and kill all of the Bandit Ringleaders. That should let the rest of them know we aren't going to stand for this any longer!"

Accept: "Consider it done!"
Reject: "You can silence your own dissenters!"

"You have done well! I fear this isn't the end of the bandits in the area, but it has certainly dealt them a blow!"

Six Bandit Ringleaders will appear throughout Regent Valley each accompanied by a random pair of Bandit Firestarters and Bandit Raiders, all of which spawn at levels based on the lowest level character in the party. Only the Ringleaders must be killed for the reward.