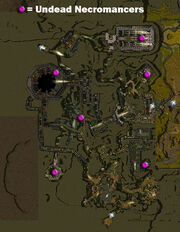 Locations of the Undead Necromancers

"Necromancer Munne may not want to admit it, but the number of roaming undead in the Catacombs is getting dangerous. Each day there are more decomposing abominations roaming the dark halls of that place. Recently, we've even encountered some making their way to the surface and frightening the locals. Or worse, attacking them!

We have discovered that the increasing number of undead in the Catacombs is caused by several powerful Undead Necromancers whose tombs have been disturbed. They are now going through the Catacombs, animating every corpse they come across. Go to the Catacombs and put those Necromancers back to rest, so we don't have to worry about the walking dead in addition to Charr. Unless, of course, you're afraid of the dark..."

Accept: "I fear nothing! They will die...again."
Reject: "I'm not afraid of the dark, I'm afraid of what it hides!"

The Undead Necromancers always spawn on the set locations on the map, with some mostly single enemy Restless Corpses and Undead Illusionists placed all over the catacombs (also in more or less set positions, though whether it is a warrior or a mesmer type is random). These three enemy types all scale their levels to that of the player, with the Undead Necromancers one level above the other two.

Take great care when approaching a group containing one of the Undead Necromancers, as it always consists of 2 more enemies of the mentioned types. Sometimes it contains even three, though it could be that the 4th enemy is merely a solo spawn in the same location.

The degeneration caused by Faintheartedness, Conjure Phantasm and Sever Artery as one, can be devastating (-9 to -10 in total). Add to it Gash from the warrior type, Imagined Burden from the mesmers, as well as Soul Barbs and Deathly Swarm of the Undead Necromancers and any melee fighter will find themselves unable to move or attack very well while dying rapidly.

The best way to deal with them is sending in an expendable melee target, like a pet, and to draw melee fighters so far away that they almost break off pursuit. That way, if you're being overpowered, you can slip just beyond the point where they leave you and return to their spawn location. Due to the fact that they lack healing skills, use Frenzy and cause a continuous stream of damage and lethal conditions, it is mostly a good idea to dispose of the Restless Corpse - warriors first.

Often enough, one may have to resort to killing one foe at the cost of being slain, only to res and go again.