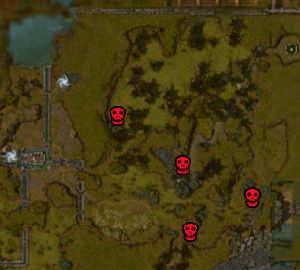 "Those Grawl are starting to be less a minor nuisance and more a serious threat to travelers. Duke Barradin has requested assistance thinning their numbers a bit up in Green Hills County. He has informed us that there is one particular Grawl called Utini Wupwup that the other Grawl seem to follow. Either he is some sort of religious or tribal leader, or the other Grawl follow his lead because he just happens to be the biggest Grawl in the area. Either way, if we slay him, it should frighten the rest of the Grawl and hopefully make them think twice before troubling us Ascalonians. Are you interested in taking care of this for us?"

Accept: "Disgusting creatures! I will take care of it."
Reject: "The Grawl are just misunderstood!"

"Ha! That will teach them to cause trouble along the king's highway!"

Utini Wupwup will appear in a random location in Green Hills County. Grawl warriors and Grawl Shamans whose levels scale with that of the player are scattered throughout the area.