Vanguard Rescue: Save the Ascalonian Noble 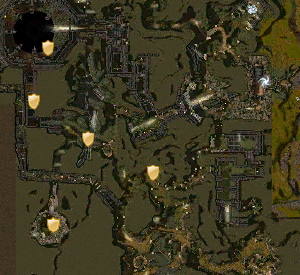 Locations of Duke Gaban in the Catacombs

"I swear, one day those Devourers are going to be the death of Duke Gaban! Some rumor convinced him that there is an even bigger Devourer nest hidden within the Catacombs below Ashford Abbey, and that egg-obsessed fool actually went down there looking for it! Now we need to waste our limited resources to go on a rescue mission. Say, you don't look too busy; how would you like to go find the poor duke before something down there decides to eat him for breakfast?"

Accept: "I will start the search immediately."
Reject: "You know, I think he sort of has this coming."

Duke Gaban: "The nest was a lie! Now, if you don't mind, I'm quite done lurking amongst the undead and would appreciate a guide to the surface."

"Hopefully, Duke Gaban realizes there are more important things in this world than his precious omelets. You did well out there. The Vanguard thanks you!"

Duke Gaban will appear in a random location in the Catacombs. This quest spawns Restless Corpses and Undead Illusionists which are levels 8, 11 or 15, depending on player level.