From GuildWiki
(Redirected from Venta Cemetery)
Jump to: navigation, search 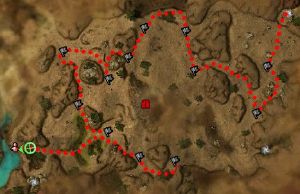 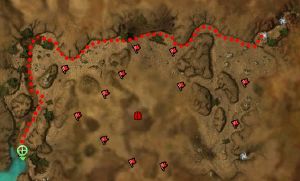 Koss must be in your party in order to enter this mission.

Lead the Sunspear Evacuees to Dajkah Inlet without being discovered by the garrison.

In this mission, the rewards are based on how many guard posts you capture.

Scattered through the mission are Sentry Traps that cause an area damage effect every several seconds. They can be disabled with the Disarm Trap temporary skill, offered by Rojis at the start of the mission. The skill has a two second activation time and is easily interruptible, though, so it isn't always useable while in combat. Traps do not need to be disabled for either the primary or bonus objective of this mission.

You get eight Sunspear Evacuees as allies. All are monks, and will heal themselves and your party a lot with Orison of Healing. Unfortunately, they all have the same AI and tend to stand in about the same spot, which can result in all making the same healing decisions - and thus all healing the same character at once, resulting in massive overhealing. Their wanding can also cause a lot of problems for melee characters when Kournan Bowmen use Whirling Defense.

Twelve guard posts are marked on the map by red flags. When you move in range of one, a timer will start counting down. If you do not defeat all of the Kournan troops stationed at the post before the timer expires, Siege Attacks will be launched at the guard post.

There is a garrison in the center of the map. Under normal circumstances, getting too near to it will result in instant death for the party.

There are several groups of six Kournans that wander somewhat in the mission. Be careful not to get hit by them while already fighting another group. In particular, near the end of the mission, the groups of Kournans are much denser than in the rest of the mission, so it helps to pull carefully.

Neutralize all twelve of the guard posts by killing the 4-5 Kournans stationed there. It does not matter for the bonus whether you neutralize each post within the time limit before siege fire begins.

While it takes a little longer to clear guard posts, there is still plenty of time to do so before any siege attacks activate. The bigger danger is from some of the wandering groups of six or seven Kournans. With the damage provided by the Sunspear Evacuees to augment your group, killing Kournans through the Kournan Priests' healing isn't much of a problem, but surviving when they all attack the same target may be. While many guard posts have a Guard Post Commander with Cautery Signet to remove conditions, the larger groups that wander have no condition removal, and can thus be handled by weakness or blinding.

Mobs get a little cluttered toward the end. After the ninth guard post, pull the roamer group that will be to the east of the bridge when you approach, to get it out of the way for later. After clearing the last guard post, one safe route to the exit is to stay near the south wall. After clearing a small group of Kournan Bowmen just west of a bridge, wait for a larger roamer group to the north to get out of the way. They'll be away for plenty long enough for you to clear the next group of bowmen and have a free path west to the exit.

Rojis: The situation just got a bit more interesting. Our Kournan friends thought we might be coming this way and they were kind enough to leave sentry traps in our path.

Rojis: Talk to me when you're ready to learn how to disable one of these things.

Rojis: To disable a sentry trap, first you must approach it. It will activate and you'll have a short window of time to shut it down using the Disable Sentry Trap skill.

Rojis: Be careful out there.

Koss: Margrid! Got my boat?

Margrid: That all depends, my friend. Got my money?

Koss: You sure you want the money? My friendship is worth more than mere gold, isn't it?

Margrid: You're charming, Koss, but I can't spend charming. The money, please.

<party leader>: Koss, She's a corsair. Can we trust her?

Koss: Only for as long as the money lasts. But for the moment, you can relax. We're going home.

Bayel: You let those Sunspears escape?

Kournan Captain: There were only a few of them sir! We've already captured and killed most of their forces

Bayel: Only a few? You idiot! Captain!

Bayel: Increase the patrols! Burn the villages that help these traitors! Send word to the Warmarshal!

Kournan Captain: Yes sir. What should I tell her?

Bayel: Tell her to send me... the Hunger.